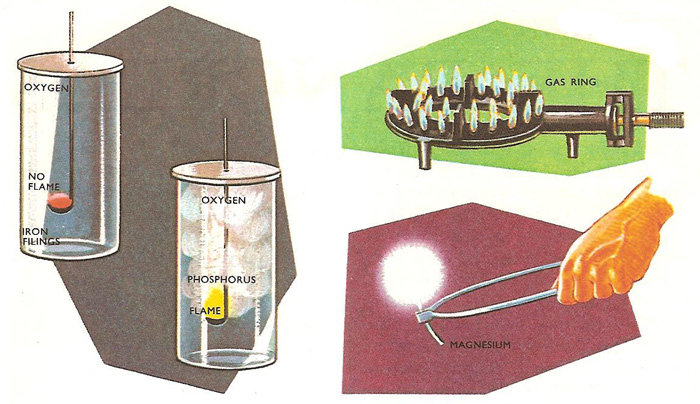 Gases can only burst into flame above the ignition temperature. Below it, the flame goes out. 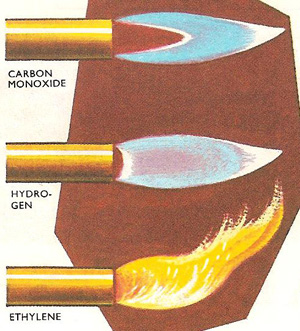 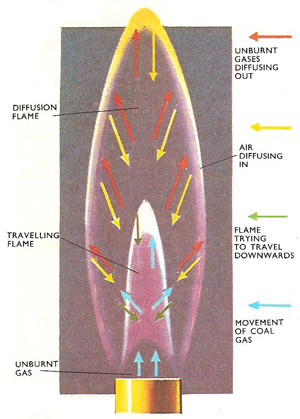 Arrows show gas movements in the different mantles of a roaring Bunsen flame. 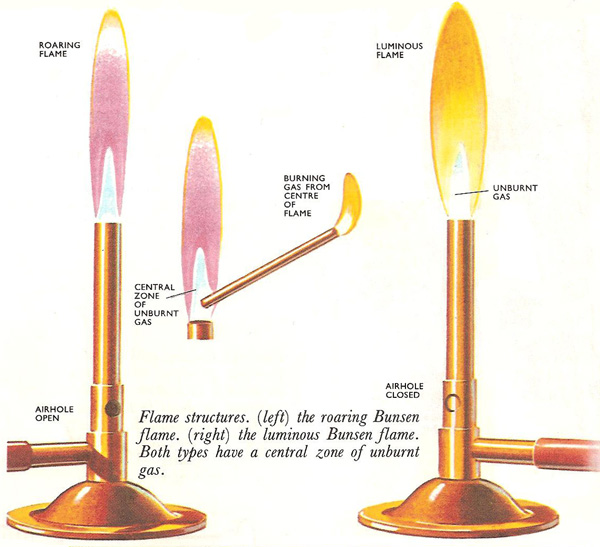 Flames occasionally flicker and dance over the surface of a burning coal fire, but most of the time the fire is flameless, illuminated only by the glow of burning solids. The flames leaping from it are areas in which gases are burning. When they burn, these gases combine with the oxygen in the air and in doing so, heat and light are given out making the flame hot and often visible.

If a gas will burn, then it always burns with a flame. For example, the gases carbon monoxide and hydrogen always burn with flames, carbon monoxide with a bright blue flame and hydrogen with a paler blue flame. But there is no hard and fast rule for solids. Some burn with flames; others do not. When hot iron filings are lowered into a jar of oxygen, they burn with a dull glow, but not with a flame. In contrast under similar conditions, warm yellow phosphorus will burst into flame and cannot be made to burn flamelessly. If the temperature is raised sufficiently for the solid to vaporize, it burns with a flame as the vapor catches fire. If no vapor is given off then there can be no flame. Volatile substances burn more often with flames than non-volatile substances.

To get a piece of paraffin wax to burn with a flame it must be heated quite strongly. But if a wick is inserted to make it a candle, no such strong heating is necessary. When a match is applied, some of the wax melts, and it is drawn up the wick by capillary action. The tip of the lighted wick becomes incandescent and the heat generated causes some wax to vaporize and catch fire. More wax rises up the wick to take its place.

When a piece of metal gauze is held above a Bunsen burner and a lighted taper is applied below, the flame is stopped by the gauze because the metal conducts the heat away, preventing the gas above from reaching the ignition point and so it cannot catch fire. When the experiment is repeated this time by applying the flame above the gauze, for the same reason, only the gas above the gauze catches fire. There is no flame, only unburned gas beneath it.

Flames differ in appearance. There are several reasons for this. The flames may have different structures. Apart from at the center, a candle flame appears uniformly yellow throughout; so does a luminous Bunsen flame, whereas a roaring Bunsen flame has an inner blue cone surrounded by an outer transparent cone. All flames also have a central zone of unburned gas at the base. This is quite easily demonstrated by holding a piece of asbestos paper so that it cuts across the lower part of the flame. A hollow ring of soot is deposited by the burning gas or vapor but none by the unburned gases. Holding another piece of asbestos paper vertically in the flame shows the zone of unburned gases to be cone-shaped.

The candle flame and the outer cone of the Bunsen flame are both examples of diffusion flames (see diffusion). When the candle is lit, the vaporized paraffin was diffuses out from the wick and mingles with the air needed for its combustion. The gases which have bee only partly burnt in the inner cone of the Bunsen flame behave similarly, diffusing out to mix with the inward diffusing air.

The inner Bunsen cone is an explosion of traveling flame. If a match is applied to one end of a tube of coal gas, the gas catches fire at that end and the flame travels along the tube, as each successive layer of gas is burnt.

The blue cone is a flame of this type, only the gas issuing from the Bunsen is not stationary. The rate at which the flame travels down through the gas is balanced by the rate at which more gas issues from the burner to take its place. As the two balance, the flame appears to be stationary. The traveling nature of the flame can be further demonstrated by turning down the gas supply. Then the flame travels down into the burner faster than the gas can come out and the Bunsen lights at the bottom. This is known as striking back. The Bunsen should never be left to burn with this sort of flame as the bottom of the burner becomes overheated. Also the gas is only partially burned and the poisonous gases escape into the atmosphere.

As for the Bunsen flame, flames of other burning substances can have various cones or mantles. The flame of burning ammonia consists of three different colored mantles or cones, an inner cone of unburned gas, a yellow middle cone, and an outer mantle of yellowish-green flame. The flame of burning carbon monoxide is bright blue, and a candle flame, bright yellow. The different colors of flames are caused by the different chemical reactions taking place within them. If a flame has three mantles, then there are three different chemical reactions taking place, one in each mantle. Certain substances in the flame give out light colors. If the reaction produces fragments consisting of a carbon atom bonded with a hydrogen atom, violet light is given out. The presence of two bonded carbon atoms tinges a flame green. Carbon particles give out red or white light.

No completely satisfactory theory has yet been put forward to explain the luminosity exhibited by some flames. At one time it was thought that the luminous flames had solid particles suspended in them. But it has been proved that although many luminous flames do contain particles of solid, this is not always so. It has also been suggested that with hydrocarbon flames the luminosity is caused by dense hydrocarbons rather than solid particles.

The mind automatically associates flames with heat, but some are actually quite cool. Over a pressure range, particular mixtures of vapor and air give flames which are comparatively cool, with temperatures around 300°C, compared with normal flame temperatures of over 1,000°C. Variation of composition or pressure may give rise to a normal flame or to an explosion. Naturally explosive mixtures must be avoided in car cylinders.