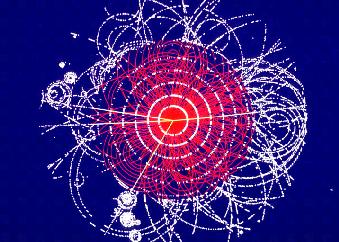 A simulated Higgs boson decay in the ATLAS detector. 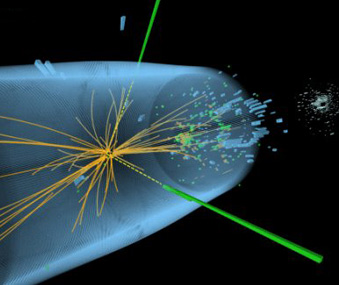 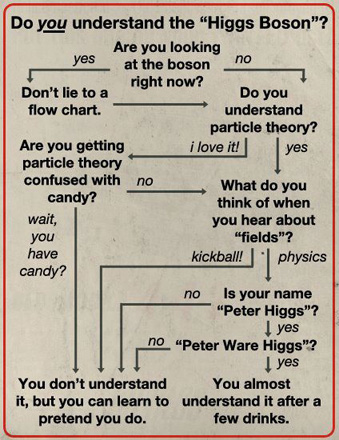 The Higgs boson is the final, long-anticipated member of the so-called Standard Model of particle physics – the pre-eminent theory describing how particles and forces interact. The Higgs boson is hypothesized as giving all other particles mass through what is called the Higgs field. The search for the Higgs boson, which became like a Holy Grail quest among particle physicists, is nearing a conclusion. In July 2012, scientists announced results obtained using both the ATLAS and CMS experiments at the Large Hadron Collider which confirmed the existence of a new particle with a mass of about 125 GeV (roughly equal to the mass of two copper atoms). This particle was subsequently recognised to be Higgs boson.

The discovery of the Higgs does not mark the end of the road for our understanding of nature at the finest level. The Standard Model fails to explain several very significant aspects of the universe we live in, including dark matter, dark energy, and neutrino oscillations. Nor does it embrace one of the key forces in nature – gravity. So, even following the discovery of the Higgs, the search continues for other particles that will point the way to other, deeper theories, such as supersymmetry.


Background to the Higgs

Elementary particle masses (in particular the difference between the massless photon and the very heavy W and Z bosons), and the differences between electromagnetism (caused by the photon) and the weak force (caused by the W and Z bosons), are critical to many aspects of the structure of microscopic (and hence macroscopic) matter; thus, if it exists, the Higgs boson has an enormous effect on the world around us.

Results announced on December 13, 2011, by scientists at the Large Hadron Collider, pointed to the possible existence of the Higgs boson. In particular, two large detectors, called ATLAS and CMS, found indications of a particle at about the same mass (125 GeV). In March 2012, data from the now-defunct US Tevatron collider pointed to a mass for the Higgs between 115 and 152 GeV. On July 4, a major announcement was made by CERN researchers, indicating that a new particle has been found, which is now accepted as being the long-sought-after Higgs boson.

The Higgs mechanism was first theorized in 1964 by Peter Higgs, François Englert and Robert Brout, working from the ideas of Philip Anderson, and independently by G. S. Guralnik, C. R. Hagen, and T. W. B. Kibble. Steven Weinberg and Abdus Salam were the first to apply the Higgs mechanism to the electroweak symmetry breaking. The electroweak theory predicts a neutral particle whose mass is not far from the W and Z bosons.

The particle known as the Higgs boson is the quantum of one of the components of a Higgs field. In empty space, the Higgs field acquires a non-zero value, which permeates every place in the universe at all times. The vacuum expectation value (VEV) of the Higgs field is constant and equal to 246 GeV. The existence of this non-zero VEV plays a fundamental role: it gives mass to every elementary particle, including the Higgs boson itself. In particular, the acquisition of a non-zero VEV spontaneously breaks the electroweak gauge symmetry, a phenomenon known as the Higgs mechanism. This is the simplest mechanism capable of giving mass to the gauge bosons (i.e., the other bosons in the Standard Model) that is also compatible with gauge theories.

In the Standard Model, the Higgs field consists of two neutral and two charged component fields. Both of the charged components and one of the neutral fields are Goldstone bosons, which are massless and become, respectively, the longitudinal third-polarization components of the massive W and Z bosons. The quantum of the remaining neutral component corresponds to the massive Higgs boson. Since the Higgs field is a scalar field, the Higgs boson has spin zero and has no intrinsic angular momentum. The Higgs boson is also its own antiparticle and is CP even.

Evidence presented on December 13, 2011, by two teams at the Large Hadron Collider suggested the possible existence of a relatively lightweight Higgs boson with a mass in the range 124–126 GeV. Prior to this there was no strong experimental evidence, despite major efforts invested in accelerator experiments at CERN and Fermilab. The non-observation of clear signals led to an experimental lower bound for the Higgs boson mass of 114.4 GeV at 95% confidence level. A small number of events were recorded by experiments at the LEP collider at CERN (the predecessor of the Large Hadron Collider) that could be interpreted as resulting from Higgs bosons, but the evidence was inconclusive.1

Precision measurements of electroweak observables indicated that the Standard Model Higgs boson mass had an upper bound of 144 GeV at the 95% confidence level as of March 2007 (incorporating an updated measurement of the top quark and W boson masses). Searches for the Higgs boson were made at the Fermilab Tevatron, which was permanently shut down in September 2011. The limits on the production cross section of the Higgs boson set by the on-going Tevatron searches were less than a factor of 3.5 away from Standard Model predictions in the mass range where the Higgs boson primarily decays to an on-shell W boson and an off-shell W boson.2 There had been optimistic articles about potential evidence of the Higgs boson,3 but evidence compelling enough to convince the scientific community as a whole.

With the December 13, 2011 announcements from CERN, however, the situation changed. The fact that two major detectors at the LHC, ATLAS and CMS, found strong signs of a particle in the same narrow energy range had physicists eagerly anticipating further measurements and analysis which, when they were made, formed the final proof that the Higgs does indeed exist.