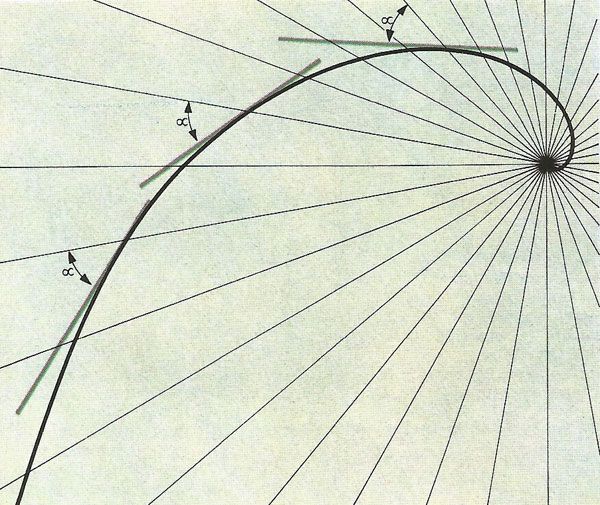 In the logarithmic, or equiangular, spiral the angle α between a tangent at any point and the radius drawn from the center is constant. The lengths of the radii to the curve are proportional to the logarithms of the angles between the radii and the initial horizontal direction. 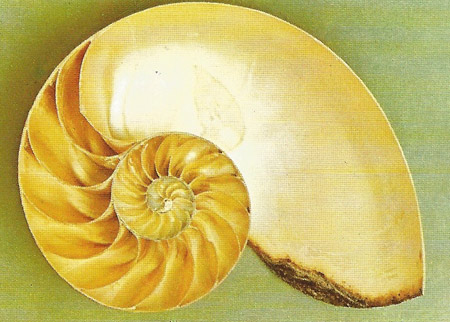 Logarithmic spirals occur in nature, generally revealing the effects of accelerating growth as in the spiral shells of snails and various other mollusks, such as the pearly Nautilus (above) of the Indian and Pacific oceans, and in flowers (below). 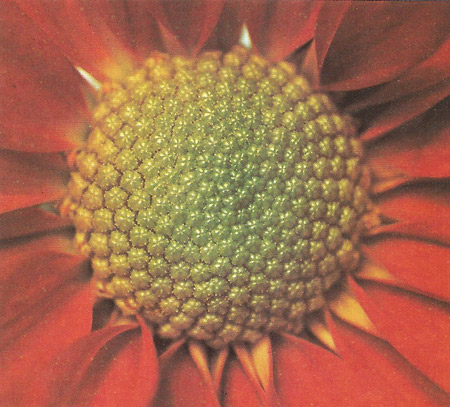 A logarithmic spiral, also known as an equiangular spiral, is a type of spiral that is seen commonly in the natural world. Wonderful examples are found in the shells of some molluscs, such as that of the nautilus and the fossil ammonites, and also in spider webs. The logarithmic spiral is an example of a transcendental plane curve.

In polar coordinates (r, θ) the equation of the logarithmic spiral is

with positive real numbers a and b. Changing a rotates the spiral while b controls how tightly and in which direction it is wrapped.

It can be distinguished from the Archimedean spiral by the fact that the distance between the arms of a logarithmic spiral increase in a geometric sequence while in an Archimedean spiral this distance is constant. Starting at a point P and moving inwards along the spiral, one has to circle the origin infinitely often before reaching it; yet, the total distance covered is finite. This was first realized by the Italian physicist Evangelista Torricelli in the seventeenth century, even before calculus had been invented. The total distance covered is r /sin θ where θ is the pitch angle and r is the straight-line distance from P to the origin.

The logarithmic spiral was first described by René Descartes and later studied in depth by Jakob Bernoulli, who called it Spiralis mirabilis (the Wonderful Spiral) and wanted one engraved on his tombstone. He did get a spiral, but unfortunately it was a rather crudely cut Archimedean type; accompanying it is the inscription Eaden mutato resurgo ("Although changed, I shall arise the same").