Fig 1. The alternate deep and shallow minima of RV Tauri stars may sometimes be replaced by spells of total irregularity. AC Herculis, whose light curve is shown here, is a case in point; it has a magnitude from 7 to 8.5. 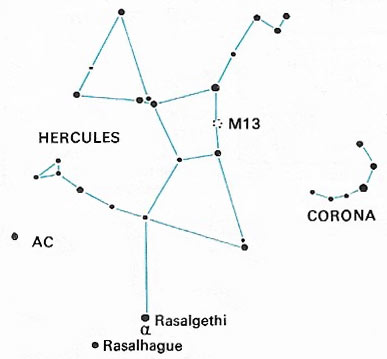 Fig 2. Location of AC Herculis in the sky. 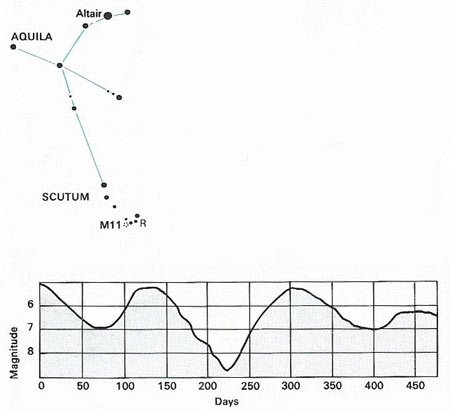 Fig 4. R Scuti location and light curve. The light curve of R Scuti (magnitude plotted against time) is only an average because all RV Tauri stars are erratic in behavior. The range of R Scuti is between magnitudes 5 and 8.6 so that at maximum it is visible to the naked eye. It always stays within the range of binoculars, appearing reddish in color. It is therefore a favourite object for amateur astronomers. 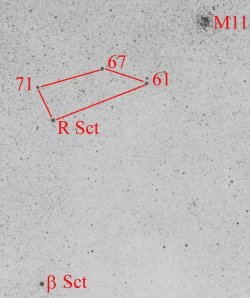 Fig 5. R Scuti is easy to find because it is one of four stars making up a quadrilateral and is not far from the beautiful open cluster of M11, nicknamed the Wild Duck.

RV Tauri is a luminous yellow supergiant pulsating variable, the light curve of which shows alternating deep and shallow minima with a period (measured between one deep minimum and the next) of 30 to 150 days and a brightness range of up to four magnitudes (Fig 1). The spectral type is typically F to G at minimum and G to K at maximum. RV Tau stars seems to be intermediate between the Cepheid variables and Mira variables. They probably represent the low mass, and at least in some cases the low metallicity, portion of stars that are in transition from the asymptotic giant branch (AGB) to white dwarfs (Fig 3). Because of their previously high mass-loss rates, many will probably become planetary nebulae. Others, however, may evolve so slowly that the envelopes may dissipate before becoming photoionized. Since the transition from the AGB to the white dwarf stage of stellar evolution isn't well understood, RV Tau stars stand as a potential bridge across this evolutionary gap. This post-AGB phase of stellar evolution is short, astronomically speaking, lasting only a few thousand years.

There are two main varieties of RV Tau stars: the RVa types, of which R Scuti is an example, maintain a roughly constant mean brightness; RVb types, which include RV Tau itself, have long-term (600- to 1,500-day) periodicity. Infrared studies suggest that RV Tau stars have dusty circumstellar shells, which may be initiated by pulsation via a shock wave. Based on the seemingly smooth transition between the RVa and RVb stars, the two groups may not be physically distinct. The RVb stars may be in an active phase in which the dust shell is replenished by dust formation close to the star. The dust may be swept out with this gaseous outflow, and in the absence of fresh dust production the star will become an RVa, with a much less dense shell. The RVa-types may have thinner dust shells or have concentration of dense dust located at large radii.

R Scuti (R Sct) is the brightest of the RV Tauri stars (Fig 4 and 5). It was discovered in 1795 by Edward Pigott when only a handful of variables of any type were known. It lies about 1° northwest of the Wild Duck Cluster and 1° north of Beta Sct in the constellation Scuti, on the northern edge of the Scutum Star Cloud.

At maximum, R Sct shines at a magnitude of about 4.5, making it visible to the naked eye. Even as the star fades to its deepest minimum of 8.8, it can still be seen using binoculars or a small telescope. It has a primary period of about 144 days. According to one suggestion, the spectral behavior of R Sct at minimum resembles that of an R Coronae Borealis star. Both classes of star erupt by fading to deep minima. Both classes fade by 3 to 7 magnitudes in about a month and can stay at minimum for weeks (RV Tauri stars) to years (RCB stars). Also, both the RV Tauri and RCrB stars are known to be enshrouded in a shell of circumstellar dust. An evolutionary link between the two types is a possibility.