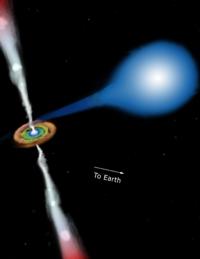 SS 433 is an X-ray binary and the first discovered member of a group of very exclusive objects that have to be known as microquasars. SS443 lies about 18,000 light-years (ly)away in the constellation Aquila within a 40,000-years-old supernova remnant designated W50.

SS433 consists of a normal O or B star, with a mass of 10 to 20 solar masses, in a 13.1-day orbit around a compact object that is either a neutron star or a black hole. Material transfers from the normal star into an accretion disk surrounding the compact object blasting out two jets of ionized gas in opposite directions at about a quarter of the speed of light. In addition the jets precess (wobble like a top) with a period of about 164 days. Radio studies show that the jets extend to 0.16 ly from the central "engine", while X-ray studies reveal emission from about 100 ly on either side, where the jets interact with the surrounding supernova remnant.

SS433 gets its name because it is object number 433 in the Stephenson-Sanduleak catalogue of stars with strong emission lines compiled by two astronomers at Case Western Reserve University, Bruce Stephenson and Nicholas Sanduleak, in 1977.