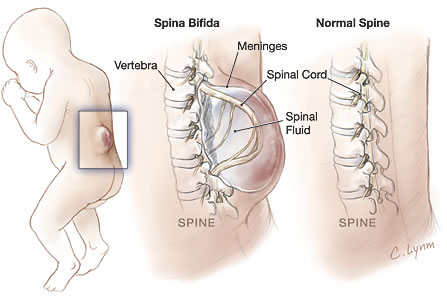 Anatomical introduction to spina bifida. The human nervous system develops from a small, specialized plate of cells along the back of an embryo. Early in development, the edges of this plate begin to curl up toward each other, creating the neural tube – a narrow sheath that closes to form the brain and spinal cord of the embryo. As development progresses, the top of the tube becomes the brain and the remainder becomes the spinal cord. This process is usually complete by the 28th day of pregnancy. But if problems occur during this process, the result can be brain disorders called neural tube defects, including spina bifida.

Spina bifida is a congenital defect of the spinal cord and spinal canal leading to a variable degree of leg paralysis and loss of urine and feces sphincter control. Spina bifida (which literally means "cleft spine"), or SB, may be associated with other malformation – particularly hydrocephalus (excessive accumulation of cerebrospinal fluid in the brain). It is an embryological disorder due to failure of fusion of the neural tube in the first month of pregnancy. Surgery has made it possible to treat mild cases by closure of the defect and orthopedic procedures can be applied to balance muscle power. Also, any hydrocephalous must be shunted.

Infants born with spina bifida sometimes have an open lesion on their spinal column where significant damage to the nerves and spinal cord has occurred. Although the spinal opening can be surgically repaired shortly after birth, the nerve damage is permanent, resulting in varying degrees of paralysis of the lower limbs. Even when there is no lesion present there may be improperly formed or missing vertebrae and accompanying nerve damage. In addition to physical and mobility difficulties, most individuals have some form of learning disability.

Occulta is the mildest and most common form in which one or more vertebrae are malformed. The name "occulta," which means "hidden," indicates that the malformation, or opening in the spine, is covered by a layer of skin. This form of spina bifida rarely causes disability or symptoms.

Closed neural tube defects make up the second type of spina bifida. This form consists of a diverse group of spinal defects in which the spinal cord is marked by a malformation of fat, bone, or membranes. In some patients there are few or no symptoms; in others the malformation causes incomplete paralysis with urinary and bowel dysfunction.

In the third type, meningocele, the meninges protrude from the spinal opening, and the malformation may or may not be covered by a layer of skin. Some patients with meningocele may have few or no symptoms while others may experience symptoms similar to closed neural tube defects.

Myelomeningocele, the fourth form, is the most severe and occurs when the spinal cord is exposed through the opening in the spine, resulting in partial or complete paralysis of the parts of the body below the spinal opening. The paralysis may be so severe that the affected individual is unable to walk and may have urinary and bowel dysfunction.

The symptoms of spina bifida vary from person to person, depending on the type. Often, individuals with occulta have no outward signs of the disorder. Closed neural tube defects are often recognized early in life due to an abnormal tuft or clump of hair or a small dimple or birthmark on the skin at the site of the spinal malformation.

Complications of spina bifida can range from minor physical problems to severe physical and mental disabilities. It is important to note, however, that most people with spina bifida are of normal intelligence. Severity is determined by the size and location of the malformation, whether or not skin covers it, whether or not spinal nerves protrude from it, and which spinal nerves are involved. Generally all nerves located below the malformation are affected. Therefore, the higher the malformation occurs on the back, the greater the amount of nerve damage and loss of muscle function and sensation.

In addition to loss of sensation and paralysis, another neurological complication associated with spina bifida is Chiari II malformation – a rare condition (but common in children with myelomeningocele) in which the brainstem and the cerebellum, or rear portion of the brain, protrude downward into the spinal canal or neck area. This condition can lead to compression of the spinal cord and cause a variety of symptoms including difficulties with feeding, swallowing, and breathing; choking; and arm stiffness.

Some newborns with myelomeningocele may develop meningitis, an infection in the meninges. Meningitis may cause brain injury and can be life-threatening.

Children with both myelomeningocele and hydrocephalus may have learning disabilities, including difficulty paying attention, problems with language and reading comprehension, and trouble learning math.

Additional problems such as latex allergies, skin problems, gastrointestinal conditions, and depression may occur as children with spina bifida get older.

In most cases, spina bifida is diagnosed prenatally, or before birth. However, some mild cases may go unnoticed until after birth, or postnatally. Very mild cases, in which there are no symptoms, may never be detected.

The most common screening methods used to look for spina bifida during pregnancy are second trimester maternal serum alpha fetoprotein (MSAFP) screening and fetal ultrasound. The MSAFP screen measures the level of a protein called alpha-fetoprotein (AFP), which is made naturally by the fetus and placenta. During pregnancy, a small amount of AFP normally crosses the placenta and enters the mother's bloodstream. But if abnormally high levels of this protein appear in the mother's bloodstream it may indicate that the fetus has a neural tube defect. The MSAFP test, however, is not specific for spina bifida, and the test cannot definitively determine that there is a problem with the fetus. If a high level of AFP is detected, the doctor may request additional testing, such as an ultrasound or amniocentesis to help determine the cause.

The second trimester MSAFP screen described above may be performed alone or as part of a larger, multiple-marker screen. Multiple-marker screens look not only for neural tube defects, but also for other birth defects, including Down's syndrome and other chromosomal abnormalities. First trimester screens for chromosomal abnormalities also exist but signs of spina bifida are not evident until the second trimester when the MSAFP screening is performed.

Amniocentesis – an exam in which the doctor removes samples of fluid from the amniotic sac that surrounds the fetus – may also be used to diagnose spina bifida. Although amniocentesis cannot reveal the severity of spina bifida, finding high levels of AFP may indicate that the disorder is present.

Mild cases of spina bifida not diagnosed during prenatal testing may be detected postnatally by X-ray during a routine examination. Doctors may use magnetic resonance imaging (MRI) or a computed tomography (CT) scan to get a clearer view of the spine and vertebrae. Individuals with the more severe forms of spina bifida often have muscle weakness in their feet, hips, and legs. If hydrocephalus is suspected, the doctor may request a CT scan and/or X-ray of the skull to look for extra fluid inside the brain.

There is no cure for spina bifida. The nerve tissue that is damaged or lost cannot be repaired or replaced, nor can function be restored to the damaged nerves. Treatment depends on the type and severity of the disorder. Generally, children with the mild form need no treatment, although some may require surgery as they grow.

The key priorities for treating myelomeningocele are to prevent infection from developing through the exposed nerves and tissue of the defect on the spine, and to protect the exposed nerves and structures from additional trauma. Typically, a child born with spina bifida will have surgery to close the defect and prevent infection or further trauma within the first few days of life.

Doctors have recently begun performing fetal surgery for treatment of myelomeningocele. Fetal surgery – which is performed in utero (within the uterus) – involves opening the mother's abdomen and uterus and sewing shut the opening over the developing baby's spinal cord. Some doctors believe the earlier the defect is corrected, the better the outcome is for the baby. Although the procedure cannot restore lost neurological function, it may prevent additional loss from occurring. owever, the surgery is considered experimental and there are risks to the fetus as well as to the mother.

The major risks to the fetus are those that might occur if the surgery stimulates premature delivery such as organ immaturity, brain hemorrhage, and death. Risks to the mother include infection, blood loss leading to the need for transfusion, gestational diabetes, and weight gain due to bed rest.

Still, the benefits of fetal surgery are promising, and include less exposure of the vulnerable spinal nerve tissue and bones to the intrauterine environment, in particular the amniotic fluid, which is considered toxic. As an added benefit, doctors have discovered that the procedure affects the way the brain develops in the uterus, allowing certain complications – such as Chiari II with associated hydrocephalus – to correct themselves, thus, reducing or, in some cases, eliminating the need for surgery to implant a shunt.

Many children with myelomeningocele develop a condition called progressive tethering, or tethered cord syndrome, in which their spinal cords become fastened to an immovable structure – such as overlying membranes and vertebrae – causing the spinal cord to become abnormally stretched and the vertebrae elongated with growth and movement. This condition can cause loss of muscle function to the legs, bowel, and bladder. Early surgery on the spinal cord may allow the child to regain a normal level of functioning and prevent further neurological deterioration.

Some children will need subsequent surgeries to manage problems with the feet, hips, or spine. Individuals with hydrocephalus generally will require additional surgeries to replace the shunt, which can be outgrown or become clogged.

Treatment for paralysis and bladder and bowel problems typically begins soon after birth, and may include special exercises for the legs and feet to help prepare the child for walking with braces or crutches when he or she is older.

Folic acid, also called folate, is an important vitamin in the development of a healthy fetus. Although taking this vitamin cannot guarantee having a healthy baby, it can help. Recent studies have shown that by adding folic acid to their diets, women of childbearing age significantly reduce the risk of having a child with a neural tube defect, such as spina bifida. Therefore, it is recommended that all women of childbearing age consume 400 micrograms of folic acid daily. Foods high in folic acid include dark green vegetables, egg yolks, and some fruits. Many foods – such as some breakfast cereals, enriched breads, flours, pastas, rice, and other grain products – are now fortified with folic acid. A lot of multivitamins contain the recommended dosage of folic acid as well.

Children with spina bifida can lead relatively active lives. Prognosis depends on the number and severity of abnormalities and associated complications. Most children with the disorder have normal intelligence and can walk, usually with assistive devices. If learning problems develop, early educational intervention is helpful.