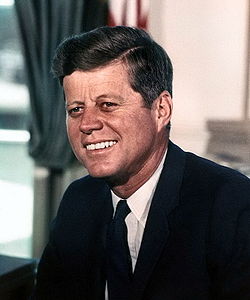 John F. Kennedy was one of the best-known Addison's disease sufferers, and also possibly one of the first Addisonians to survive major surgery.

Addison's disease is a rare disorder, also called adrenal insufficiency or hypocortisolism, which occurs when the adrenal glands don't produce enough of the hormone cortisol (hydrcortisone) and, in some cases, the hormone aldosterone. Addison's disease is named after the English physician Thomas Addison (1793–1860) who first identified it. It occurs in all age groups and afflicts men and women equally. The disease is characterized by weight loss, muscle weakness, fatigue, hypotension (low blood pressure), and sometimes darkening of the skin in both exposed and nonexposed parts of the body. It was invariably fatal before hormone treatment became available in the 1950s.

Addison's disease affects about 1 in 100,000 people. Most cases are caused by the gradual destruction of the adrenal cortex, the outer layer of the adrenal glands, by the body's own immune system. About 70% of reported cases of Addison's disease are caused by autoimmune disorders, in which the immune system makes antibodies that attack the body's own tissues or organs and slowly destroy them. Adrenal insufficiency occurs when at least 90% of the adrenal cortex has been destroyed. As a result, often both glucocorticoid (cortisol) and mineralocorticoid (aldostertone) hormones are lacking. Sometimes only the adrenal gland is affected, as in idiopathic adrenal insufficiency; sometimes other glands also are affected, as in polyendocrine deficiency syndrome.

Polyendocrine deficiency syndrome is classified into two separate forms, referred to as type I and type II.

Type I occurs in children, and adrenal insufficiency may be accompanied by

This form of adrenal insufficiency is much more common than primary adrenal insufficiency and can be traced to a lack of ACTH. Without ACTH to stimulate the adrenals, the adrenal glands' production of cortisol drops, but not aldosterone. A temporary form of secondary adrenal insufficiency may occur when a person who has been receiving a glucocorticoid hormone such as prednisone for a long time abruptly stops or interrupts taking the medication. Glucocorticoid hormones, which are often used to treat inflammatory illnesses like rheumatoid arthritis, asthma, or ulcerative colitis, block the release of both corticotropin-releasing hormone (CRH) and ACTH. Normally, CRH instructs the pituitary gland to release ACTH. If CRH levels drop, the pituitary is not stimulated to release ACTH, and the adrenals then fail to secrete sufficient levels of cortisol.

Another cause of secondary adrenal insufficiency is the surgical removal of benign, or noncancerous, ACTH-producing tumors of the pituitary gland (Cushing's syndrome). In this case, the source of ACTH is suddenly removed, and replacement hormone must be taken until normal ACTH and cortisol production resumes.

Less commonly, adrenal insufficiency occurs when the pituitary gland either decreases in size or stops producing ACTH. These events can result from

The symptoms of adrenal insufficiency usually begin gradually. Characteristics of the disease are

About 50% of the time, one will notice

Addison's disease can cause irritability and depression. Because of salt loss, a craving for salty foods also is common. Hypoglycemia, or low blood glucose, is more severe in children than in adults. In women, menstrual periods may become irregular or stop.

Because the symptoms progress slowly, they are usually ignored until a stressful event like an illness or an accident causes them to become worse. This is called an addisonian crisis, or acute adrenal insufficiency. In most cases, symptoms are severe enough that patients seek medical treatment before a crisis occurs. However, in about 25% of patients, symptoms first appear during an addisonian crisis.

Symptoms of an addisonian crisis include

Left untreated, an addisonian crisis can be fatal.

In its early stages, adrenal insufficiency can be difficult to diagnose. A review of a patient's medical history based on the symptoms, especially the dark tanning of the skin, will lead a doctor to suspect Addison's disease.

This is the most specific test for diagnosing Addison's disease. In this test, blood cortisol, urine cortisol, or both are measured before and after a synthetic form of ACTH is given by injection. In the so-called short, or rapid, ACTH test, measurement of cortisol in blood is repeated 30 to 60 minutes after an intravenous ACTH injection. The normal response after an injection of ACTH is a rise in blood and urine cortisol levels. Patients with either form of adrenal insufficiency respond poorly or do not respond at all.

In patients suspected of having an addisonian crisis, the doctor must begin treatment with injections of salt, fluids, and glucocorticoid hormones immediately. Although a reliable diagnosis is not possible while the patient is being treated for the crisis, measurement of blood ACTH and cortisol during the crisis and before glucocorticoids are given is enough to make the diagnosis. Once the crisis is controlled and medication has been stopped, the doctor will delay further testing for up to 1 month to obtain an accurate diagnosis.

Once a diagnosis of primary adrenal insufficiency has been made, X-ray exams of the abdomen may be taken to see if the adrenals have any signs of calcium deposits. Calcium deposits may indicate TB. A tuberculin skin test also may be used.

If secondary adrenal insufficiency is the cause, doctors may use different imaging tools to reveal the size and shape of the pituitary gland. The most common is the CT scan, which produces a series of X-ray pictures giving a cross-sectional image of a body part. The function of the pituitary and its ability to produce other hormones also are tested.

Treatment of Addison's disease involves replacing, or substituting, the hormones that the adrenal glands are not making. Cortisol is replaced orally with hydrocortisone tablets, a synthetic glucocorticoid, taken once or twice a day. If aldosterone is also deficient, it is replaced with oral doses of a mineralocorticoid called fludrocortisone acetate (Florinef), which is taken once a day. Patients receiving aldosterone replacement therapy are usually advised by a doctor to increase their salt intake. Because patients with secondary adrenal insufficiency normally maintain aldosterone production, they do not require aldosterone replacement therapy. The doses of each of these medications are adjusted to meet the needs of individual patients.

During an addisonian crisis, low blood pressure, low blood glucose, and high levels of potassium can be life threatening. Standard therapy involves intravenous injections of hydrocortisone, saline (salt water), and dextrose (sugar). This treatment usually brings rapid improvement. When the patient can take fluids and medications by mouth, the amount of hydrocortisone is decreased until a maintenance dose is achieved. If aldosterone is deficient, maintenance therapy also includes oral doses of fludrocortisone acetate.

Patients with chronic adrenal insufficiency who need surgery with general anesthesia are treated with injections of hydrocortisone and saline. Injections begin on the evening before surgery and continue until the patient is fully awake and able to take medication by mouth. The dosage is adjusted until the maintenance dosage given before surgery is reached.

Women with primary adrenal insufficiency who become pregnant are treated with standard replacement therapy. If nausea and vomiting in early pregnancy interfere with oral medication, injections of the hormone may be necessary. During delivery, treatment is similar to that of patients needing surgery; following delivery, the dose is gradually tapered and the usual maintenance doses of hydrocortisone and fludrocortisone acetate by mouth are reached by about 10 days after childbirth.

A person who has adrenal insufficiency should always carry identification stating his or her condition in case of an emergency. The card should alert emergency personnel about the need to inject 100 mg of cortisol if its bearer is found severely injured or unable to answer questions. The card should also include the doctor's name and telephone number and the name and telephone number of the nearest relative to be notified. When traveling, a needle, syringe, and an injectable form of cortisol should be carried for emergencies. A person with Addison's disease also should know how to increase medication during periods of stress or mild upper respiratory infections. Immediate medical attention is needed when severe infections, vomiting, or diarrhea occur. These conditions can precipitate an addisonian crisis. A patient who is vomiting may require injections of hydrocortisone.