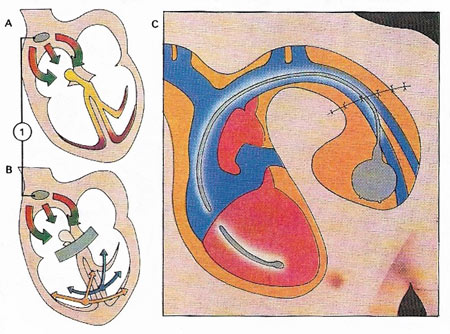 Fig 1. The heart has a natural pacemaker (A), the sinoatrial node (1), which controls heartbeat and rhythm. It transmits regular impulses through special conducting tissues, stimulating heart muscle contraction. Defective conducting tissue may result in atria and ventricles contracting in a dissociated way which may lead to complete heart block (B). To avoid this possibility, a battery-operated artificial heart pace-maker can be used to stimulate ventricular contraction at a normal rate of 70 to 80 beats per minute. The pacemaker can be placed under the skin of the chest with the electrode leads passing through a great vein to the ventricle (C). Batteries for pacemakers are charged every two years. 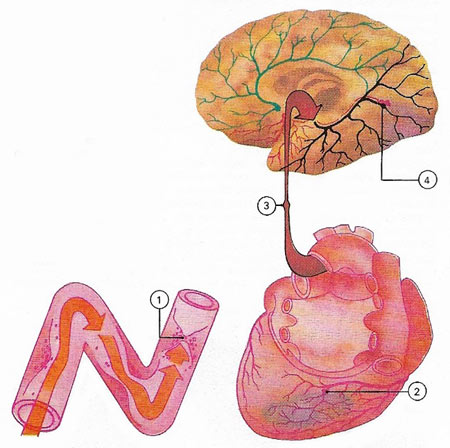 Fig 2. Thrombosis is the blocking of a blood vessel by a blood clot (1). This commonly happens in an artery that is already narrowed and roughened by fatty deposits, a condition called atherosclerosis, which is quite common in old age but is not part of the natural process of aging. It is aggravated by high pressure. If a thrombosis occurs in a coronary vessel (2) the part of the heart that it supplies will die (myocardial infarction) and the rhythms of the heart will be disturbed. This is what happens in a heart attack. Blood clots that form in one vessel, whether an artery or vein, may break off and then travel (3) to lodge in another vessel. A clot of this kind is called an embolus. If this occurs in cerebral vessels (4), it can deprive the brain cells of oxygen and this results in a stroke. In a few cases, surgery to the damaged vessel may be helpful but physiotherapy and rehabilitation are the mainstays of treatment in most cases of this sort. 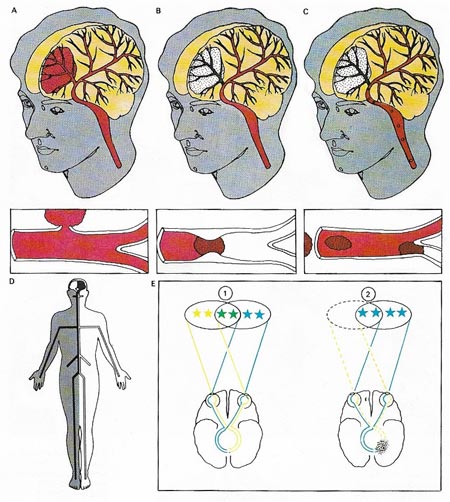 Fig 3. A stroke is a disruption of the blood supply to the brain and is due either to a hemorrhage or a cerebral blood vessel (A), a thrombus (B) or an embolus (C). The damage (stippled area) may be permanent, but the outcome of a stroke depends on the extent and area of the brain affected by it. The symptoms can range from a temporary loss of speech or other brain function and paralysis of the limbs to sudden death. A stroke on one side of the brain affects the limbs of the opposite side of the body because of the crossing over of nerve tracts in the brain stem (D). There is a similar effect on the visual cortex (E). Normal vision (1) is impaired on the left side (2) by a stroke on the right side. 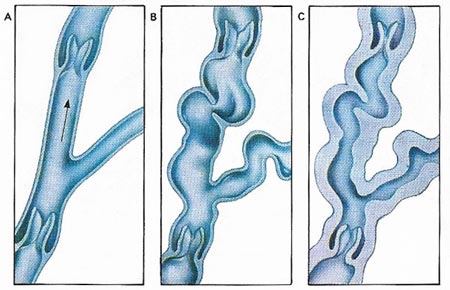 Fig 4. Veins normally have a special system of valves that enables the blood to travel towards the heart but not back (A). People whose occupations involve long periods of standing are prone to varicose veins. This condition occurs when the valves do not function properly, the veins become stretched and distorted (B). Varicose veins of the lower end of the bowel are called hemorrhoids. If the affected veins fail to respond to simple treatment they will sometime require injections or surgical removal. When varicose veins become infected and inflamed it is a form of phlebitis (C). 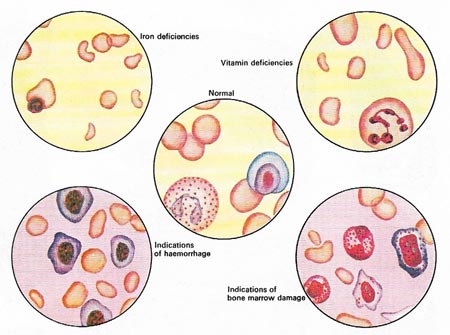 Fig 5. Anemia produces recognizable changes in the red cells of a blood film. Compared with normal blood, iron deficiency shows up in small, pale cells with reduced hemoglobin content. Iron deficiency may be due to hidden bleeding rather than dietary insufficiency and needs investigating. Lack of either of the vitamins B12 or folic acid produces large, pale, abnormally shaped red cells and white cells with multiple nuclei. Diets that are lacking in liver and dairy products like eggs, milk, and cheese (containing vitamin B12 or fresh fruit and vegetables (folic acid), can cause these anemias, but even with an adequate diet the vitamins that are needed may not be properly absorbed. Pernicious anemia, for example, prevents the proper absorption of vitamin B12. After severe hemorrhage or damage, bone marrow may release into the blood red cells that are immature or abnormal in some way. 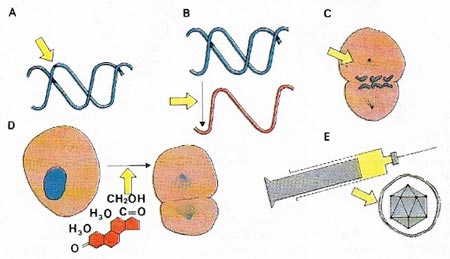 Fig 6. Treatment for leukemia is aimed at preventing the abnormal white cells from reproducing themselves. Drug treatment interferes with the doubling of the genetic material (DNA) prior to division (A, B) or with the division process itself (C). Steroid drugs also interfere with division (D).

An obvious feature of the body's circulation system is the close interdependence of the heart, the blood vessels (arteries, veins, and capillaries) and the blood. Abnormality or disease of any part often leads to malfunction of the whole system. Congenital malformation that disrupts the flow of blood through the heart and/or its major blood vessels may lead to a baby appearing blue soon after birth because the blood is carrying to little oxygen. An operation may be needed soon after the disorder is diagnosed or perhaps later in childhood to correct the abnormality.

The heart and its valves are susceptible to damage by disease – a commonly known one being rheumatic fever which frequently leads to rheumatic heart disease. The damage it causes to the valves in childhood can lead to severe malfunctioning of the heart in later life but in many cases a valve-replacement operation can provide a remedy.

Occasionally the heart's pacemaker beats irregularly (Fig 1), or a defect in the conduction of the electrical impulse that causes the beat may lead to a chamber beating out of sequence. These so-called dysrhythmias may be helped by drugs (such as digitalis) but in some cases an artificial pacemaker is needed.

Any decrease in the supply of blood to the heart itself through the coronary arteries can lead to attacks of pain, called angina pectoris, a kind of cramp of the heart muscle that is usually worse after exercise or effort. Severe restriction in the blood supply can cause failure of the heart muscle. This is accompanied by sudden excruciation pain in the chest and is commonly called a heart attack.

The usual cause of a heart attack is a thrombosis or clot in a coronary artery (see Figure 2). Definite causes of coronary thrombosis are still largely speculative. A person who is overweight, takes little exercise, smokes, has high blood pressure, a high level of cholesterol in the blood and a family history of heart disease incurs a high risk of attack.


Defects in arteries and veins

Hardening of the arteries (arteriosclerosis) is a degeneration of the wall of the artery and is a normal part of growing old. It affects all the arteries of the body and can be accelerated and exaggerated by high blood pressure. Atherosclerosis (deposition of fats and cholesterol within an artery) is much more serious. It causes narrow, roughened vessels and may lead to thrombosis. If it occurs in the arteries of the legs, exercise may become painful and a graft may be needed to replace the damaged artery. Atherosclerosis of the aorta may reduce the elasticity of the vessel producing a bulging of the wall called an aneurysm, especially in the lower back. This may rupture spontaneously and cause severe hemorrhage needing emergency treatment.

In many cases, the cause of high blood pressure or hypertension is unknown but hardening of the small arteries of the kidney is certainly contributory. As high blood pressure makes this condition worse, treatment is needed to break the vicious circle. Several drugs can help. Some act directly to remove adrenaline (which causes the arteries to contract). Others tranquilize a patient and so reduce the amount of adrenaline he produces. Digitalin helps the heart to pump more vigorously while drugs called diuretics reduce the fluid in the circulation.

Hemorrhoids (piles) and varicose veins are common conditions, both made worse by long periods of standing (Fig 4). Clots can also develop, especially in the legs, when the veins are inflamed (phlebitis). The leg will be swollen and painful but in plain thrombosis there may be no signs and diagnosis is difficult. Venous thrombosis is liable to occur in people who have prolonged periods in bed after an operation or stroke. The danger of a clot (which can be 15–18 cm (6–7 in) long and 0.5 cm (0.2 in) wide) in the legs is that it may break off to become an embolism which travels through the heart and lodges in the lungs. Thrombosis is usually treated with anticoagulant drugs.

Blood is subject to a number of diseases. In anemia there is usually either a reduction in the number of red cells or in the cell's hemoglobin content (see Fig 5). The reduction in the oxygen-carrying capacity of the blood causes tiredness and breathlessness. More rarely, disorders of the bone marrow, which makes the blood cells, lead to anemia; sometimes the red cells are destroyed more quickly than their usual four-month life-span and are not replaced fast enough.

Leukemia is the name given to a group of diseases characterized by proliferation of abnormal white cells. The patient is likely to suffer from anemia, infection, and bleeding. Drugs, including steroids, that interfere with the production of white cells are used in the treatment of leukaemia (Fig 5).

Blood plasma contains various factors needed for the normal clotting mechanism. Deficiency of one, the antihemophilic factor, leads to hemophilia. Deficiency in another causes the much rarer Christmas disease which has similar effects. Treatment with antihemophilic factor is needed as soon as possible to prevent further damage. Unfortunately the factor is in short supply and lasts in the body less than 24 hr. The hope for the future is that sufficient will be made available so that hemophilics can treat themselves at home.