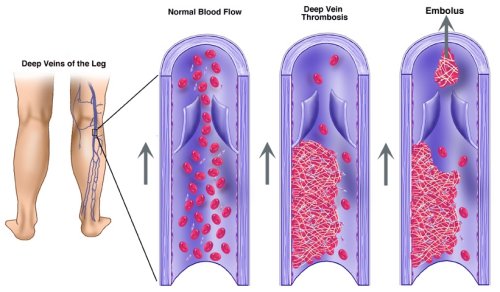 Credit and © Society of Interventional Radiology.

Deep vein thrombosis is a blood clot that forms in a vein deep in the body. Most deep vein clots occur in the lower leg or thigh. They also can occur in other parts of the body.

If a clot in a vein breaks off and travels through the bloodstream, it can lodge in one of the lungs. This is called pulmonary embolism, which is a very serious condition that can cause death. Blood clots in the thigh are usually more likely to break off and cause pulmonary embolism than clots in the lower leg or other parts of the body.

A blood clot also can occur in veins that are close to the surface of the skin. This type of blood clot is called superficial venous thrombosis or phlebitis. Blood clots in superficial veins are not dangerous because they can't travel to the lungs.


Who is at risk for deep vein thrombosis?

Many factors may increase your risk for deep vein thrombosis:

The risk for deep vein clots increases if a person who has several risk factors at the same time. For example, a woman with an inherited condition for clotting who also takes birth control pills has an even higher risk to have a blood clot.

Only about half of the people with deep vein thrombosis have symptoms. The symptoms may include:

Some people find out that they have deep vein thrombosis only after the clot has moved from the leg and traveled to the lung (pulmonary embolism). The symptoms may include:

A doctor will obtain a medical history and carry out an examination in order to determine if a person has deep vein thrombosis.

The main goals in treating deep vein thrombosis are to:

Several types of medicine may be used to treat and/or prevent deep vein thrombosis:

Vena cava filters are used when a patient can't take medicines to thin the blood, or when they are taking blood thinners but continue to develop clots anyway. The filter is inserted inside a large vein called the vena cava. The filter catches clots that break off in a vein before they move through the bloodstream to the lungs (pulmonary embolism). The filter doesn't prevent new clots from developing. Graduated dvt compression stockings can reduce the chronic swelling that can occur after a blood clot has developed in a leg. The leg swelling is due to damage to the valves in the leg veins. Graduated compression stockings are worn on the legs from the arch of the foot to just above or below the knee. These stockings are tight at the ankle and become looser as they go up the leg. This causes a gentle compression (or pressure) up the leg. The pressure keeps blood from pooling and clotting.

Some drawbacks of wearing the stockings are:

Much of the treatment for deep vein thrombosis takes place at home. It is important to:

Preventing deep vein thrombosis depends on whether a person has had a clot before and on risk factors for developing a clot.

If a deep vein clot has developed before, future clots may be prevented by:

In the cases where a person has not had a deep vein clot before but has risks factors for developing one, it may be possible to prevent a clot by: