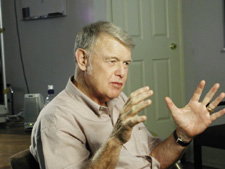 Bruce Murray was a Professor of Planetary Science and Geology at the California Institute of Technology and faculty member since 1960, Director of the Jet Propulsion Laboratory (1976–82), and current President of the Planetary Society, an organization he and Carl Sagan founded in 1979. Murray was involved with planetary exploration since its inception in the 1960s and headed JPL during the Viking landings on Mars and the Voyager encounters with Jupiter and Saturn. He was among those scientists who openly supported the idea of further research into the problem of unidentified flying objects in the wake of the Condon Report. In a 1972 review of J. Allen Hynek's book, he wrote:

On balance, Hynek's defense of UFOs as a valid, if speculative, scientific topic is more credible than Condon's attempt to mock them out of existence... From this juror's point of view, Hynek has won a reprieve for UFOs with his many pages of provocative unexplained reports and his articulate challenge to his colleagues to tolerate the study of something they cannot understand.

He attended the Apr 1975 Morrison Workshop on Interstellar Communication dealing with planet detection and thereafter championed the idea of an all-sky survey component to NASA's SETI plans. Upon Murray's appointment as Director of JPL, his personal interest in the field led to the establishment of a SETI office at the Laboratory under Robert Edelson. A partnership subsequently developed between JPL and the NASA Ames Research Center, with JPL taking responsibility for the all-sky survey portion and Ames the targeted search portion of NASA's High Resolution Microwave Survey. Murray is currently involved with the development of a proposal for a penetrator probe, based on the Mars Microprobe, to explore a site on the Valles Marineris system. Among his other interests is the societal impact of new information technology, including the Internet.