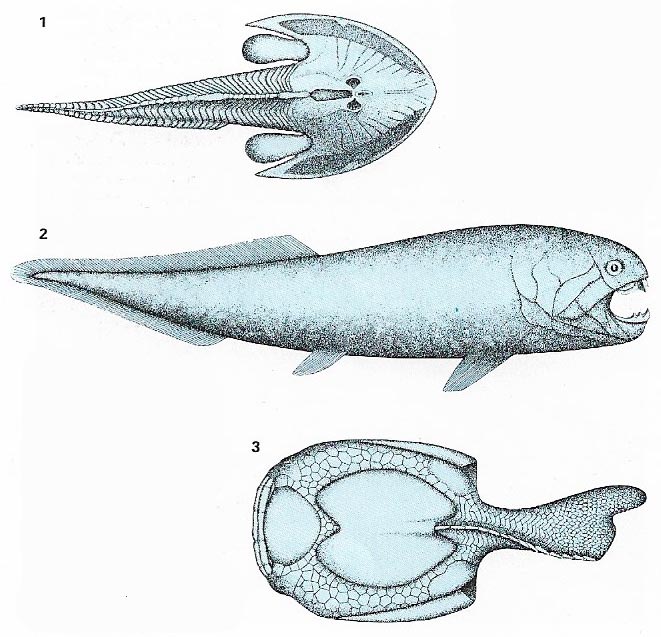 Fig 1. (1) One of the jawless fish of the Silurian was Cephalaspis. It had a triangular head shield bearing the mouth and paired fins beneath, and a pair of vibration-sensitive organs on the upper surface, (2) Dinichthys was an armored placoderm. With a length of 9 m (30 ft) it was a fearsome fish of the Devonian seas. (3) Drepanaspis was a Devonian agnathan. It was a flattened bottom-dweller with a complicated pattern of armor. 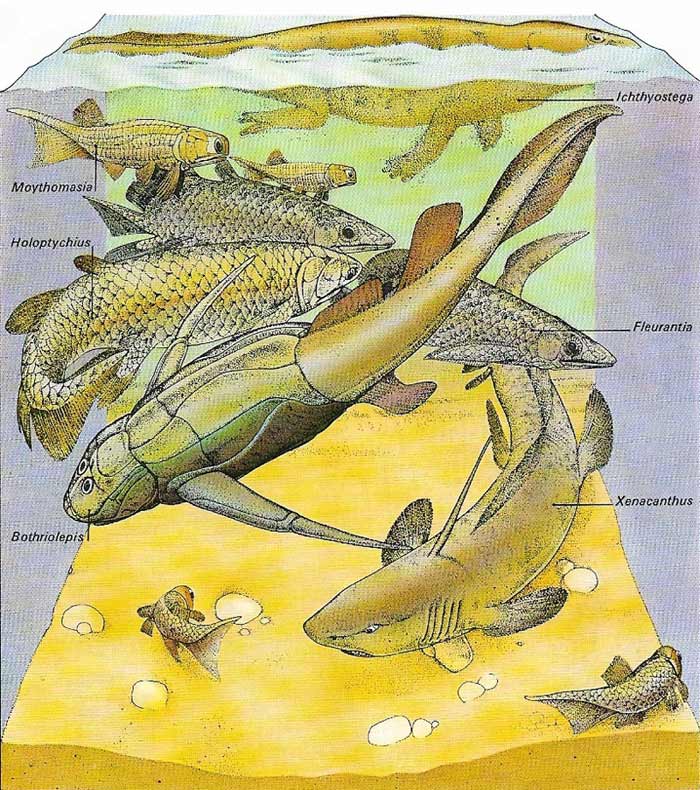 Fig 2. The typical habitats of Devonian fish were inland seas, many of which existed among the freshly formed mountain chains of the north continent at that time. Shown here is a selection of the fish types found in such an area. Bothriolepis was a typical placoderm reaching a length of 24 cm (9 in). Its head and body were armored as were the first pair of fins. Xenacanthus was an early member of the Chondrichthyes and had many shark-like features. It swam by means of paired, leaf-shaped fins and had a long, pointed tail. It was 75 cm (2.5 ft) long. Moythomasia was one of the ray-finned Osteichthyes while Holoptychius was one of the lobe-finned type, Fleurantia was a lobe-finned lungfish similar to the ancestral stock that gave rise to the first amphibians such as Ichthyostega, shown here on the surface. 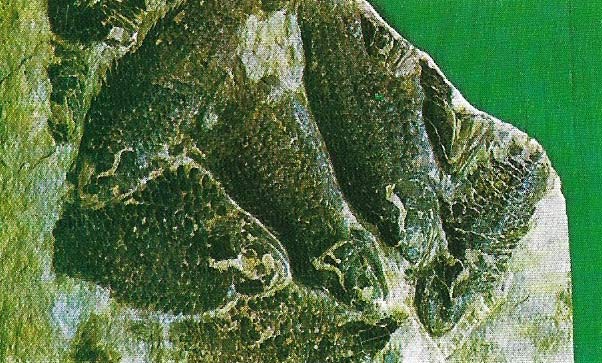 Fig 3. As the Devonian desert pools dried out the inhabitants crowded together in the last drop of moisture and died, like these Holoptychius from Scotland. The land vertebrates evolved from creatures that survived such conditions.

Fig 4. To be able to live out of water a fish would need a lung system for breathing and at least one pair of muscular leg-like fins to allow it to travel. These features are found in the Devonian 60 cm (2 ft) long lobe-fin Eusthenopteron. 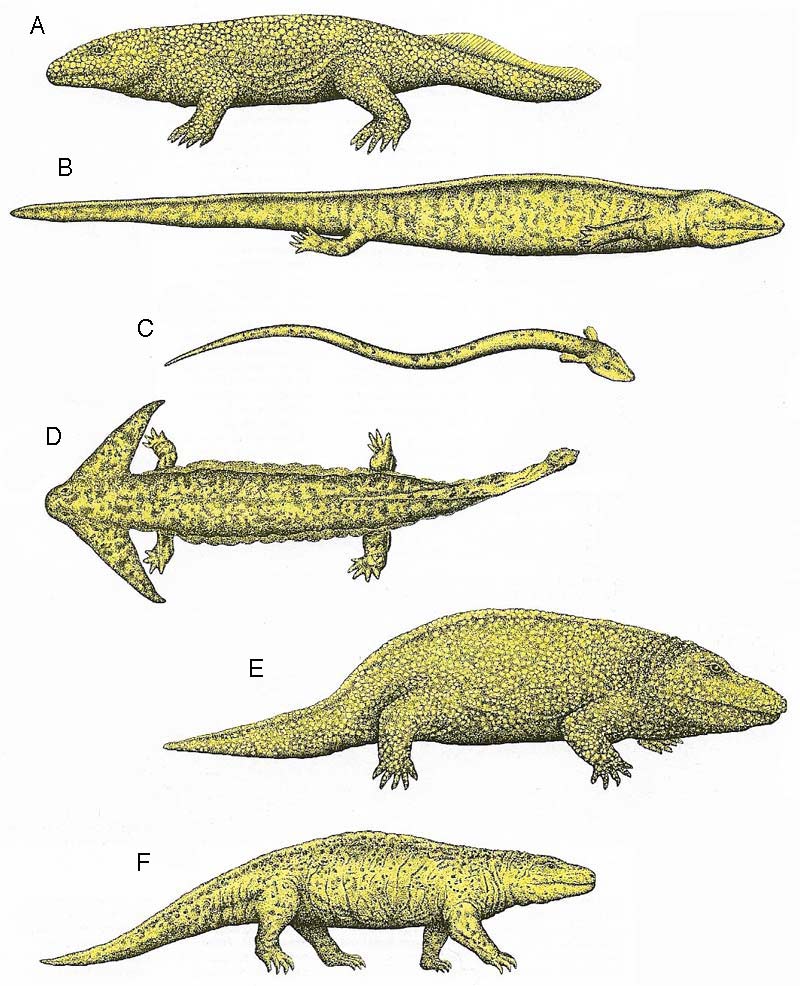 Fig 5. (A) Ichthyostega is the earliest and most primitive amphibian known. Found in Devonian deposits of Greenland, it had a typical amphibian body about 1 m (39 in) long but retained a fish skull and tail. (B) Eogyrunus was one of the great amphibians of the Carboniferous coal swamps. With a length of 5 m (16 ft) it must have resembled an alligator and pursued a similar type of existence in the shallow waters. (C) Dolichosoma shows the adaptability of the Carboniferous amphibians. It was 1 m (39 in) long and had no limbs, giving it an eel-like appearance that suggests an eel-like mode of life. (D) Diplocaulus was a Permian amphibian that reached a length of 60 cm (2 ft). Its peculiarity was its boomerang-shaped skull, which suggests that it lived in mud at the bottom of ponds or lakes. (E) Eryops was a massive Permian amphibian typical of the grotesque forms that developed just before the age of amphibians passed into that of the reptiles. It was 1.5 m (5 ft) long and was well adapted for life on land. (F) Seymouria was a Permian amphibian so advanced that there is still much discussion as to whether it was an amphibian or a primitive reptile. It was 60cm (2 ft) long and the bones of its limbs were distinctly reptilian. 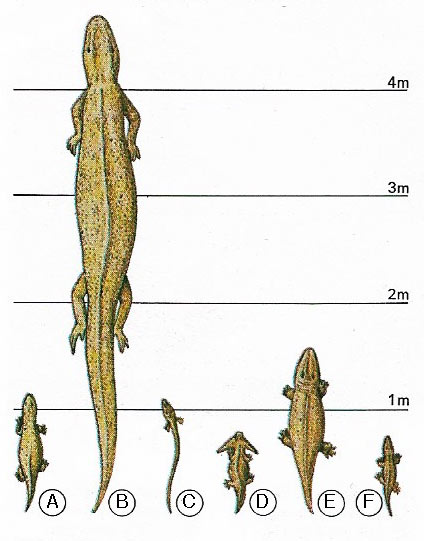 Fig 6. The sizes of upper Paleozoic amphibians varied as much as the shapes. The letters correspond to the amphibians so labeled in Fig 5.

Vertebrates, the animals with backbones, are evolved from segmented, worm-like animals. This is seen in modern vertebrates such as ourselves by the segmented nature of the backbone and the fairly repetitive patterns of the ribs. The pattern of early vertebrate evolution shows well the development of new features from a simple, basic form.


Toward the age of fish

The first recognizable skeletal features of early vertebrates would have been the jointed support for the main muscular system – the backbone – and a box to contain the brain, namely the skull. This is more or less the layout of the earliest and most primitive fish, the agnathans (Fig 1). These Silurian forms had no jaws, the mouth being merely a sucking organ. They breathed through gills which were paired and supported on bony outgrowths. As time progressed, the first pair or gill-supports moved forward and became hinged to the skull to form the jaws, and bony structures evolved to support swimming organs. The true fish had developed.

The jawed fish are divided into three groups: the Placodermi, armor-plated fish of the Devonian; the Chondrichthyes, cartilage-skeletoned sharks and rays that have existed since the Devonian to the present day; and the Osteichthyes, bony fish that also appeared in the Devonian and represent the major type of fish found in the seas today.

The Devonian period is known as the age of fish because during this time all three groups of fish came to the fore and dominated the sea. Even in those early times the bony fish were divided into the ray-finned and lobe-finned types. The ray-finned fish are what we think of as typical – swimming by means of paired fins supported by a "ray" of bony outgrowths and balancing by means of a swim-bladder of air within the body. the lobe-finned fish have their fins supported by muscular lobes and in some instances the swim-bladder is connected to the gullet to form a lung. After Devonian times the lobe fins decreased in importance and today are represented only by four genera, but before that they were to play a very significant role in the history of life on our planet.

The Devonian lobe-finned fish lived in freshwater lakes among the mountains of the Northern Hemisphere. These lakes would occasionally dry out, killing everything that lived in them (Fig 3). The lungfish, however, with the ability to breathe out of water, and their lobed fins providing a clumsy but serviceable means of locomotion on land (Fg 4), could exist, at least for short periods, out of the water. Often this was enough to enable them to find their way to the next pond. As time passed, the bones in the lobe were formed into a more efficient support and the tetrapod limb was developed.

The early limb, built of two main sections and several digits at the end, became the basic pattern of all land vertebrates to follow. The earliest amphibian, Ichthyostega (Fig 5A), from the upper Devonian of Greenland where forests of sizeable land plants were beginning to grow, had the early tetrapod limb but also retained fish-like characteristics in the bones of the skull and in the tail.

By the time of the Carboniferous, amphibians were plentiful and they mostly belonged to one extinct group called the labyrinthodonts – so called because of the convoluted nature of the tooth enamel. These had a much more powerful vertebral column than Ichthyostega, reflecting the fact that they spent much more time out of the water where their weight would have been buoyed up. They probably had the same general life-style as modern amphibians, spending most of their adult life on land and returning to the water to lay eggs. The eggs would have hatched into fish-like tadpoles with external gills and these would have lived in the water only until they were mature, exactly as frog tadpoles do today.

The Carboniferous amphibians adapted swiftly to the different ecological niches offered by the dry-land environments and they were all carnivores, the smaller ones eating the insects that abounded in the coal forests and the larger ones living like crocodiles and eating either fish or members of their own kind in the swamps.

Other upper Paleozoic amphibians, unrelated to the labyrinthodonts, adopted very different and specialized modes of life. Some spent all their time in the water, losing their legs and adopting a snake-like body. One such creature was Carboniferous Dolichosoma (Fig 5C). Others became flattened and their skulls grew into broad, flat horns, the purpose of which is obscure. These, like Diplocaulus (Fig 5D), must have lived in the mud that lined the bottom of pools.

The labyrinthodonts and the other specialized amphibians became extinct during the Triassic period leaving only their descendants: the small groups that we know today. But some time before this, the amphibians gave rise to an intermediate group that was to abandon the water altogether and become reptiles. These, the seymouriamorphs, showed very advanced features, especially in the reptilian nature of the limbs, although the skull and vertebras remained distinctly amphibian. Typical of this group is the Permian Seymouria (Fig 5F) which, however, could not be the direct ancestor of the reptiles since primitive reptiles are known from the earlier Carboniferous period.