reptiles in the Mesozoic 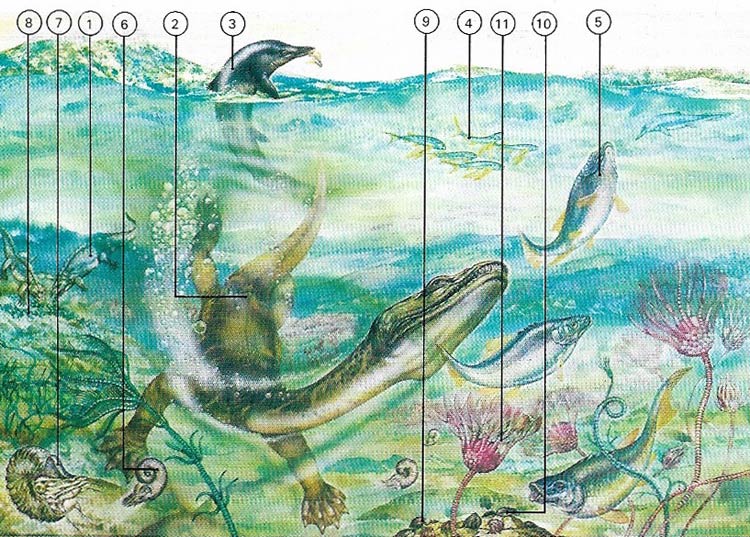 Fig 1. Central Europe in Triassic times was covered by a shallow, limy sea surrounded by low-lying desert plains. The animal life in this sea was completely different from earlier kinds. The sudden diversification of the reptiles that was taking place on land was evident in the sea as well and several groups adopted features that equipped them for a sea-going existence. Placodus (1) retained a familiar reptilian shape but had webbed feet and a flattened tail to help it to swim, and rounded, knob-like teeth for crushing shellfish. It attained a length of 2 m (6.5 ft). Nothosaurus(2) belonged to the group ancestral to the sea-living plesiosaurs of the Jurassic and Cretaceous – and showed an elongation of the neck and a shortening of the tail, both plesiosaur features. It ate fish and had a length of 3 m (10 ft). Most fish-like was the 2 m (6.5 ft) Mixosaurus (3), an early ichthyosaur. It had limbs modified into paddles and the start of a fish-like tail and dorsal fin. These creatures fed on fish such as Thoracopterus (4), a flying fish, and Semionotus (5). The invertebrate fauna was typical of the Mesozoic with the ammonites, cephalopods with coiled shells, very much in evidence. They differed from one another by the ornamentation on the shells, Cladiscites (6) having longitudinal ribs and Trachyceras (7) transverse ribs. Shellfish were a mixture of brachiopods like Coenothyris (8) and Tetractinella (9), and bivalves such as Miophoria (10). Sea lilies like Encrinites (11) flourished. The bodies of these creatures were buried in the limy mud of the sea-bed, which was later solidified into limestone, then raised to form the Alps. These organisms were found fossilized in north Italy. 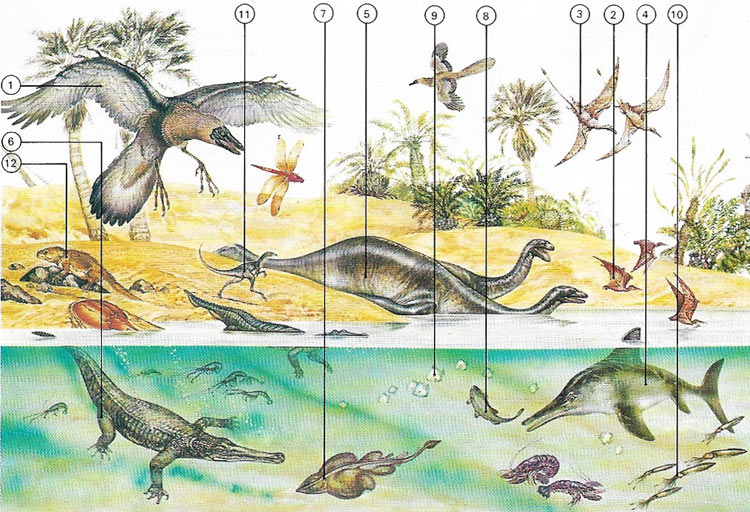 Fig 2. In the region of Bavariaduring the Jurassic period there was a series of islands and quiet, shallow lagoons. Fine-grained limestone was slowly precipitated in them preserving the remains of animals and plants that lived in the area. The most significant fossil from these deposits is Archeopteryx (1). This is regarded as the first bird because it had wings and feathers, but some experts claim it was a reptile because of its lizard-like skull, tail, and fingers, Also flying above the lagoons were pterosaurs, the gliding reptiles such as Pterodactylus (2) and the long-tailed Rhamphorhynchus (3). They ranged in size between that of a sparrow and of an eagle. Archeopteryx was crow-sized. The sea abounded in swimming reptiles that were even better adapted to life in the sea than those of the Triassic. These included Ichthyosaurus (4), which was fish-shaped, Plesiosaurus (5) with its long neck, and Steneosaurus (6), a sea crocodile. Up to 7 m (23 ft) long, they ate fish such as the early banjo fish (7), Macrosemius (8), and Mesodon (9). Also in the lagoons lived squid-like belemnites (1) and lobsters, prawns, and king-crabs. In the undergrowth of the islands and along the mud banks of the shoreline ran the smallest dinosaur Compsognathus (11) which was the size of a chicken, and Homoeosaurus (12), a lizard-like creature related to the modern tuatara of New Zealand. 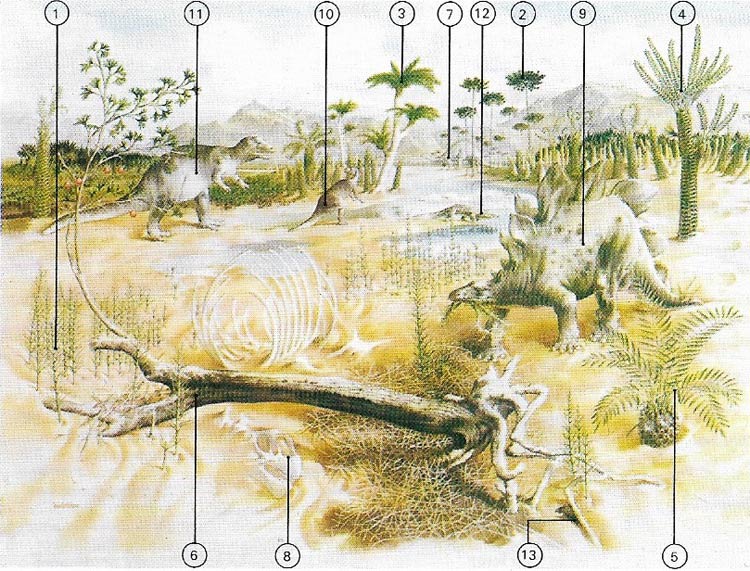 Fig 3. In the upper Jurassic of North America there is a sequence of rocks called he Morrison Formation which is famous for the bones of giant dinosaurs found in it. During the upper Jurassic, the Rocky Mountains were just beginning to rise and material washed off them was spread by sluggish, winding streams to form a low fertile plain to the east. The sand-spits and mudbanks of these rivers, destined to form the rocks of the Morrison Formation, gave rise to a lush vegetation of horsetails (1), ferns, cycad-like plants, and conifers. Among these browsed the herbivorous dinosaurs, which were preyed on by the theropods. The most common plats were conifers (2), tree conifers (3), Williamsonia (4), and other Bennettitales (5), and the ginkgo tree (6) which was widespread at that time. The herbivorous dinosaurs tat fed on them included the huge sauropods Atlantosaurus (Apatosaurus or Brontosaurus) (7) and Camarasaurus (8), the armored Stegosaurus (9) and the ornithopod Camptosaurus (10). These were preyed on by the theropod Antrodemus (or Allosaurus) (11) and crocodiles (12) that were very like modern types. Primitive mammals (13) were present, but were still small and insignificant.

Fig 4. The Cretaceous landscape of North America differed from the Jurassic in that modern trees began to replace the forests of ferns and Bennettitales. The animal life, however, did not undergo any major change and the dinosaurs were still the dominant life form. Although many of these became truly enormous, some of them were of quite modest size, The last of the armored dinosaurs were the ceratopsians ranging in size from Triceratops (1) 7 m (23 ft) to Brachyceratops (2) 2 m (6.5 ft). The theropods that fed on them were huge like Tyrannosaurus (3) at 12 m (39 ft), but there were also small theropods. Ornithomimus (4) was 4 m (13 ft) long and built like an ostrich. It probably fed on small lizards and eggs. They lived at the end of the Cretaceous just before the dinosaurs died out. 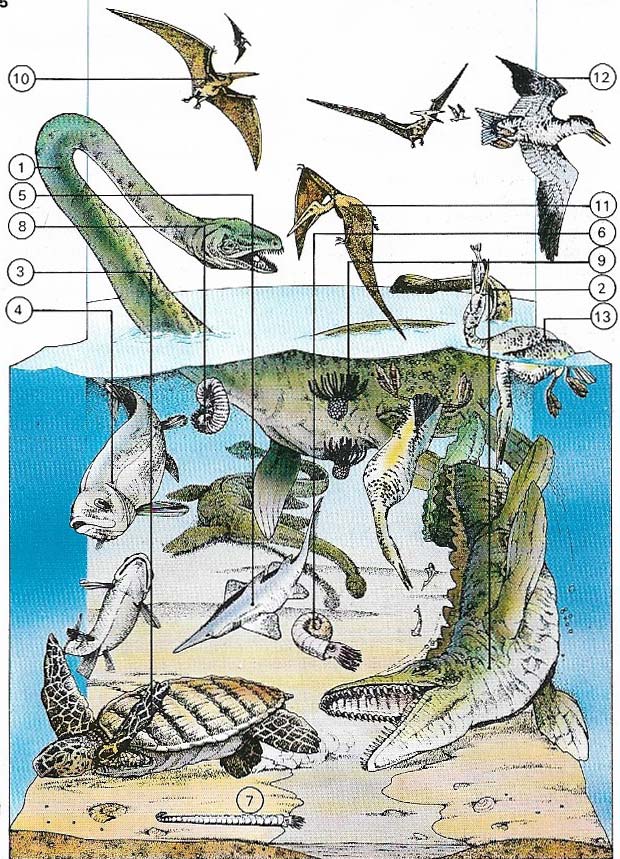 Fig 5. The seas of the Cretaceous period were rich in microscopic limy algae, the shells of which accumulated on the seafloor to form great deposits of chalk. The greatest sea creatures of the time were the reptiles: the 15 m (50 ft) plesiosaur Elasmosaurus (1), 66% of which was neck, the great sea lizard Tylosaurus (2), and the turtle with a 3 m (10 ft) shell (Archelon) (3). Fish include the 3 m (10 ft) long herring Portheus (4) and the living "ghost shark" Scapanorhynchus (5).Ammonites such as Acanthoceras (6), Baculites (7), and Scaphites (8) still existed. The sea-lily Uintacrinus (9) was a free-swimming organism. Above the water soared the pterosaurs Pteranodon (10) and Nyctosaurus (11). Specialized seabirds like Ichthyornis (12) and flightless Hesperornis (13) existed at the time. 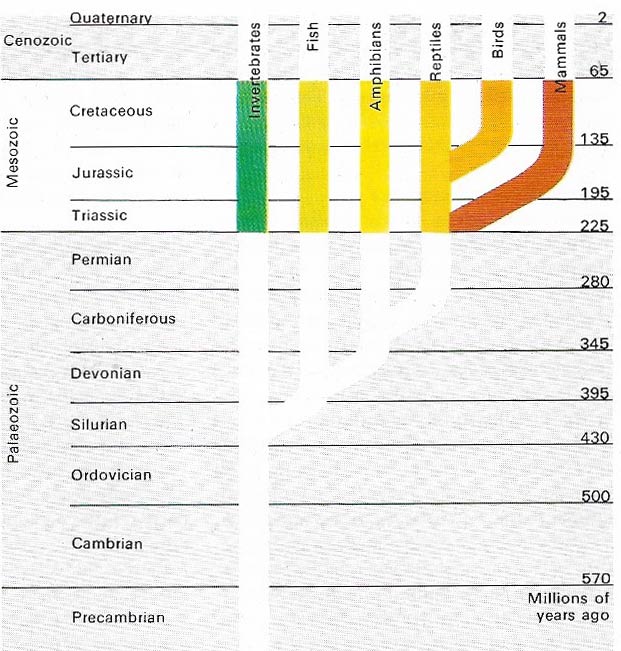 Fig 6. Life in the Mesozoic.

The age of reptiles – when reptiles were the dominant form of large animal life on Earth – began about 225 million years ago and ended, quite abruptly about 65 million years ago. The Mesozoic era, as it is called, was made up of the Triassic, Jurassic, and Cretaceous periods. During that time reptiles dominated land, sea, and sky, and evolved into what were some of the largest and most terrifying land animals that ever existed – the dinosaurs.


Reptiles return to the sea

The oldest period of the Mesozoic, the Triassic (Fig 1), saw a perpetuation of the desert environment that had been established during the preceding Permian period. Mountain ranges that had arisen during the Permian in the Northern Hemisphere were worn down to arid hills and plains with scattered salt lakes. Plant life differed little from that of the previous era, consisting mostly of ferns and horsetails in the moist areas and conifers such asVoltzia and Araucarites, which resembled modern monkey-puzzles, on the drier hill slopes. While the desert environment had changed little, this was certainly not true of its inhabitants. The complex interactions of living things that prevailed in the oceans during the Paleozoic was swept away and replaced by a new order of existence. The cephalopods of the time – early relatives of modern squids and octopuses – developed into ammonites, an advanced group with bodies encased in chambered shells that was to dominate the seas of the Mesozoic.

In the seas and estuaries, aquatic reptiles were becoming prominent. Some groups, that had evolved from amphibians (see prehistoric fish and amphibians) to lead a totally dry-lane existence, found it advantageous to return to the sea. As a result, they adopted aquatic features such as webbed feet and streamlined bodies that enabled them to exploit their ancestral environment as expertly as their forebears had done. On land, the reptiles were extremely versatile. Kuehneosaurus even took to the air on primitive gliding wings like those of the so-called flying lizards found in Malaysia today. The mammals had evolved, but they were tiny and left few remains. Among the land-dwelling reptiles was a lizard-like creature, a thecodont, no bigger than a turkey, that began to walk on its hind legs, leaving its forelimbs free for grasping or balancing. This small creature was the ancestor of the great dinosaurs that were destined for future domination of the Earth.

During the Jurassic period (Fig 2, 3), about 190 million years ago, the single large continent that had been in existence during most of the upper Paleozoic was splitting up as continental drift continued. The main crack ran from north to south, eventually widening to become the Atlantic Ocean, with Europe first separating from North America, followed by Africa from South America. Humid climates returned to the continents and lush vegetation grew over most of the world.


The coming of the dinosaurs

The jungles of the Jurassic consisted mostly of ferns and tree ferns, with stands of conifers. The Bennettitales – gymnosperms that resembled cycads – with their thick, stumpy trunks and crowns of fern-like leaves, provided the closest thing to flowers – rosettes of seed-bearing cones. Reed beds of horsetails grew by the shallow waters. These were the jungles in which the great dinosaurs of the Jurassic period lived. There was ample vegetation to support the herbivorous sauropods and bird-hipped dinosaurs, the prey of the carnivorous theropods. Also present were the gliding pterosaurs, crocodiles, and the early mammals.

Most of the remains of those ancient land creatures that can be seen in museums today were preserved because they fell into water and were buried by sediments when they died. Such a rare and fortunate combination of circumstances occurred in Bavaria where, in upper Jurassic times, fine-grained limestone was gently precipitated into shallow lagoons. The animal and plant life preserved by this process has provided us with a full picture of the extreme specialization of reptiles into an abundance of flying and swimming types, from the appearance of the smallest dinosaurs to the first true bird.


Last of the dinosaurs

The Cretaceous period (Fig 4 and 5), which began about 135 million years ago, was a time of spreading, shallow seas. There the swimming reptiles reached the peak of their dominance, as did the ammonites. On land, ferns and cycads gave way to the more familiar willow, sycamore, and oak. These lands supported the last and greatest of the dinosaurs. Flying reptiles also grew to enormous sizes at the end of the period and one pterosaur had a wing span of 15.5 m (50 ft).

At the end of the Cretaceous period a number of sweeping changes took place in the Earth's animal life. The dinosaurs died out, as did the specialized swimming ad flying reptiles, together with the ammonites and belemnites. A major asteroid impact together with widespread volcanic activity caused drastic environmental changes, altering the climate and modifying the vegetation. Most of the distinctive reptilian life of the Mesozoic rapidly became extinct, leaving the mammals to emerge into dominance.