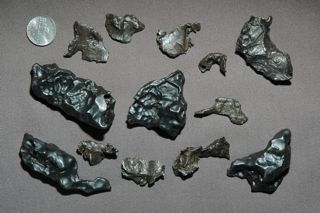 The Sikhote-Alin meteorite is a huge iron meteorite that broke up in the atmosphere and fell as a shower near the village of Paseka in the western part of the Sikhote-Alin mountain range in southeast Siberia at 10:38 am local time on 12 February 1947. Witnesses reported seeing a fireball that was brighter than the Sun. Coming out of the north and descending at an angle of 40°, it left a trail of smoke and dust 30 km long that lingered for several hours. Light and sound from the fall were reported in a radius of some 300 km around the point of impact. Having entered Earth's atmosphere at about 14.5 km/s (31,000 mph), the great iron mass began to break into fragments, which fell together over an elliptical area of about a square kilometer, the biggest making craters and pits, up to 26 m across and 6 m deep.

The original mass of the meteorite has been put at more than 70 tons and the largest recovered fragment is a 1,745 kg specimen now on display in Moscow. The Sikhote-Alin is classified structurally as a coarsest octahedrite with a Widmanstatten bandwidth of nearly a cm. Chemically it is a Group IIB meteorite, with 5.9% nickel, 0.42% cobalt, 0.46% phosphorus, about 0.28% sulfur, other trace elements, and all the rest iron itself.