science in the Renaissance 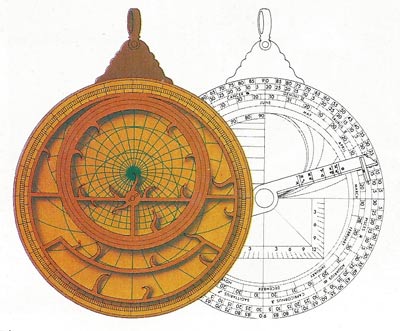 The astrolabe, invented by the Greek Hipparchus around 150 BC and developed by Arab scholars and astronomers, was introduced to Europe in about the 10th century. Two metal disks bore projections of the celestial and terrestrial spheres. A rotating arm on the back enabled the user to set the inclination of an object from the horizon and to calculate various angles. A forerunner to the sextant, it was a navigational aid whose uses included finding angles of latitude and the time. 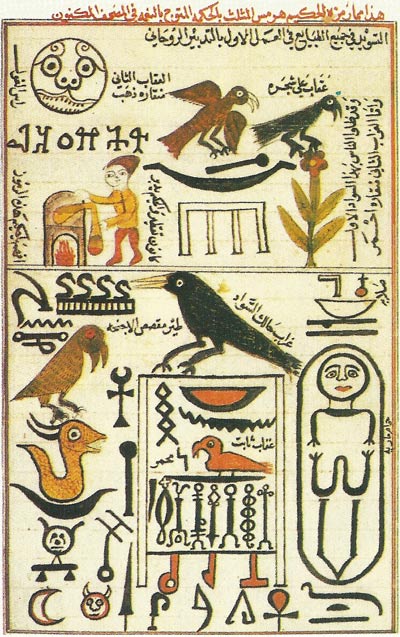 Alchemical processes are represented by the figures on this Arab manuscript reflecting cross-cultural influences. The Arabs gained their main introduction to alchemy through Alexandria and spread it to Western Europe in about the 11th century. Although they improved on the experimental techniques of the Alexandrians they did not escape the influence of their mystical theorizing which was based on animistic beliefs in objects possessing souls. 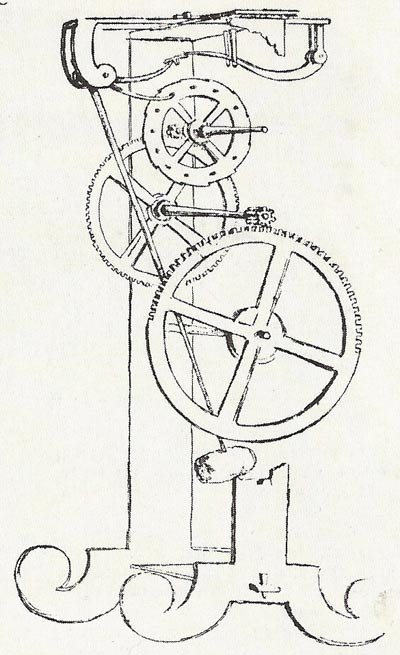 Galileo discovered the constancy of the swing of a pendulum, which he later adopted into a pendulum clock. His development of the telescope led to original observations on the planets, including the discovery of the satellites of Jupiter, first described in a pamphlet of 1610. The Church imprisoned him for refuting its divine knowledge. 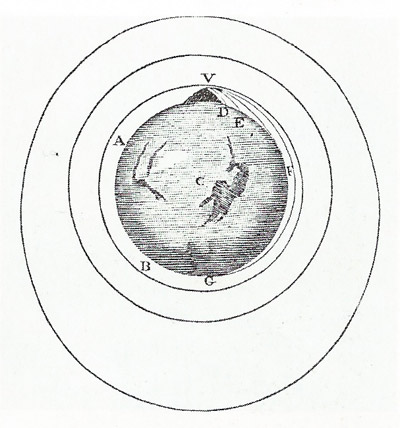 Isaac Newton calculated the speed at which a body projected horizontally from the top of a mountain would leave the earth and begin revolving around it. His diagram of the path of an artificial satellite [B] was published in 1728, the year after his death. Newton's genius emerged while he was at Cambridge University. Within a few years he had laid the basis of differential and integral calculus, elucidated the nature of light and color and had begun to explore the usefulness of mathematical analysis to physical theories. His main achievements in physical science were expressed in his Principia (1687) and Opticks (1704). 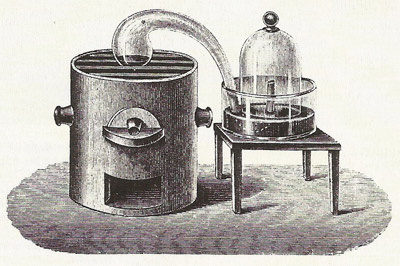 Antoine Lavoisier founded modern chemistry by means of experiments leading to his theory about the nature of combustion. This had previously been ascribed to the transfer of a substance called phlogiston, the main agent of chemical change sometimes released as fire. Lavoisier heated mercury and air in a flask with a curved neck, which enabled him to measure exactly the decrease in volume of gas and gain in weight of mercury during 12 days' heating. By means of this apparatus (illustrated here from Lavoisier's own diagram) he showed that the changes could be explained completely in terms of the active constituent of the air discovered by Joseph Priestly (1733–1804), to which Lavoisier gave the name oxygen. The idea of phlogiston was superfluous and chemistry could develop as a rational science based entirely on quantitative measurements. Experiments gave rise to theories that were then tested by other experiments.

Men gained some practical knowledge of the working of materials in early times but work in the crafts (what is now called technology) was regarded as a lowly pursuit. One reason for this attitude was the disagreeable working conditions associated with them. An Egyptian scribe of 1500 BC noted that the metal-worker "stinks like fish-spawn".


Alchemy and the Renaissance

In the 2nd century AD, Diocletian (245–313) ordered that all books on the working of gold, silver and copper should by destroyed to prevent counterfeiting and inflation. The effect was to reduce rational research on practical problems and to increase interest in magic as a method of transmuting base metals into gold. The center of the development was Alexandria and the Arabs called the new science alchemy after Khem, or "black", the name given to Egypt because of its black earth.

The Alexandrians invented apparatus for heating, melting, filtering, and distilling substances. They introduced the glass flasks and retorts still typical of chemical laboratories. The Arabs adopted, extended and transmitted these advances. Their greatest chemist was Jabir ibn Haijan, or Gebir (c. AD 721–817), who worked on the transmutation of metals and propounded a theory of their constitution that was not completely superseded until the 18th century. Besides being familiar with chemical operations such as crystallization, solution, and reduction, he attempted to explain them. His most useful discovery was nitric acid.

Modern science was founded during the Renaissance in the urban society of Italian cities where craftsmen became emancipated and even famous. The extreme example was Leonardo da Vinci (1452–1519) who knew little Latin and no Greek but analyzed technical processes scientifically.

Nicolas Copernicus (1473–1543) was a Polish-German scholar who studied at Cracow and Bologna in the 1490s. He noted from astronomical references in Latin and Greek literature that Heraclides (388–315 BC) had assigned a motion to the earth "after the manner of a wheel carried on its own axis". Copernicus found "by much and long observation" that a consistent account of the movements of the planets could be given on the basis that the Earth revolves around the Sun. The account of this in Copernicus' treatise De Revolutionsibus Orbium Caelestium was published in 1543 when he was on his deathbed. The Copernican theory is perhaps the most important scientific theory in history for it changed man's conception of his place in the universe. Formerly mankind had believed that the universe revolved around the Earth and itself; now it realized that the human race was but a minute incidental speck in a universe of almost inconceivable vastness.

The Renaissance effort in science was completed by Galileo Galilei who cleared the way for modern science. Copernicus discovered how the Solar System works but it was Galileo who gained the first precise knowledge of how things on the Earth move. He was born in Pisa in 1564, the same year as Shakespeare, and died in 1642, the year in which Isaac Newton was born. He went to the local university. According to legend, a swinging lamp in the cathedral attracted his attention. He noticed that the time of the swing was independent of the size of the swing (its amplitude). When he arrived home he checked the fact with a bullet and a piece of string. He later used this fundamental property of a pendulum in designing a pendulum clock.

When Galileo was appointed professor he was obliged to teach Aristotelian science. This caused him to make a careful study of Aristotle's ideas, especially those on the motion of objects. Aristotle (384–322 BC) based his theory on the assumption that objects fall with a speed proportional to their weight. Galileo devised experiments to measure exactly how fast objects do fall and found that all that fall freely do so at the same speed. He made many other discoveries. The results of his application of the telescope to astronomical observation were particularly spectacular evidence that Aristotle's picture of the universe was incomplete and mistaken. Galileo did not fully grasp the theological implications of this.

Galileo's demonstration that the movement of objects could be exactly determined by a combination of experiment and mathematical reasoning was extended by Isaac Newton (1642–1727). Newton showed that all the then known physical aspects of the universe and nature could be completely described by mathematical theory utilizing laws consistent with experience. Newton's account, in his Philisophiae Naturalis Principia Mathematica (1687), is possibly the greatest single intellectual effort yet made.

Newton's achievements increased confidence in the power of human reasoning. They had a particularly striking effect in France where Pierre Laplace (1749–1827) and Joseph Lagrange (1736–1813) extended the Newtonian theory and its supporting mathematics. The new confidence in experiment and calculation developed also in other sciences. Antoine Lavoisier (1743–1794) revolutionized chemistry, dispatching the magical and mystical remnants from it and in doing so laying the foundations of modern chemistry.