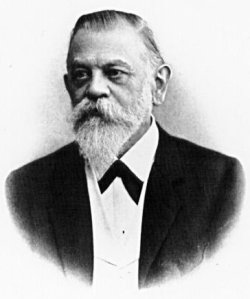 Hermann Vogel was a German astronomer, born in Leipzig, who pioneered the use of astronomical spectroscopy and photography. Vogel first studied at the Polytechnical school in Dresden, and then returned to Leipzig to study natural sciences at the University, where he became assistant at the Observatory. In 1870, increasingly interested in astronomy, he became director of the Bothkamp observatory (near Kiel), and in 1879 joined the Potsdam Astrophysical Observatory (near Berlin), of which he became director in 1882, a position he held until his death. In the course of his career, he was elected to most of the largest scientific academies and societies of Europe and America.

Vogel pioneered the use of spectroscopy and photography in astronomy. Relying on the Doppler shift of spectral lines, he measured the solar rotation and showed that the solar photosphere shared the rotational motion inferred from sunspot observations. He also carried out some of the first spectroscopic studies of other planets in the solar system. Making use of photography in spectroscopic studies, he was among the first astronomers to measure the radial velocities of bright stars, and to attempt the classification of stars on the basis of their spectra. His spectrophotographic studies of the stars Algol and Spica lead him to the discovery of spectroscopic binaries, and allowed him to estimate some of the orbital parameters of these binary systems.