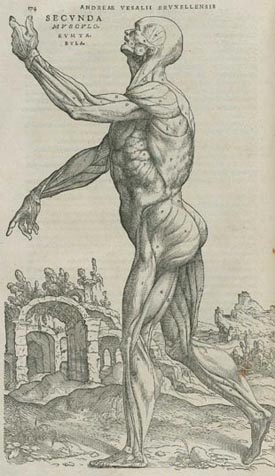 The study of human anatomy is as old as that of medicine, though for many centuries physicians' knowledge of anatomy left much to be desired. Anaxagoras had studied the anatomy of animals and anatomical observations can be found in the Hippocratic writings (see Hippocrates), but it was Aristotle who was the true father of comparative anatomy, and human dissection (the basis of all systematic human anatomy) was rarely practiced before the era of the Alexandrian School and the work of Herophilus and Erasistratus. The last great experimental anatomist was Galen. His theories, as transmitted through the writings of the Arab scholars Rhazes and Avicenna, held sway throughout the medieval period. Further progress had to await the revival of the practice of human dissection by Servetus and Vesalius in the 16th century. The latter founded the famous Paduan school of anatomy which also included Fallopius and Fabricius, whose pupil William Harvey reunited the studies of anatomy and physiology in postulating the circulation of the blood in de Mortu Cordis (1628). This theory was confirmed some years later when Malpighi discovered the capillaries linking the arteries with the veins. Since the 7th century many important anatomical schools have been founded and the study of anatomy has become an essential part of medical training. Important developments in the late 18th century included the foundation of histology by Bichat and that of modern comparative anatomy by Cuvier.

The rise of microscopic anatomy has of course depended on the development of the microscope; it found its greatest success in the announcement of Schwann's cell theory in 1839.

Anatomical position refers to the fact that all descriptions of the human body are based on the assumption that the person is standing erect, with the upper limbs by the sides and the face and palms of the hands directed forward. This is the so-called anatomical position. The various parts of the body are then described in relation to certain imaginary planes.