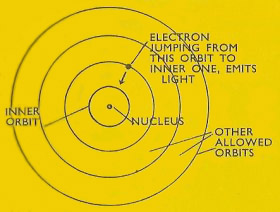 In the incorrect model of the atom, proposed by J. J. Thomson in 1904 (sometimes called the currant-bun or plum-pudding model), electrons were supposed to be embedded in a "sphere of positive electrification," and the mass of the atom was supposed to be contained in the electrons. In Bohr's model of the hydrogen atom the electron is allowed certain orbits around the nucleus: in jumping from one orbit to an inner one, the atom emits light of a certain frequency which depends on the orbits concerned. 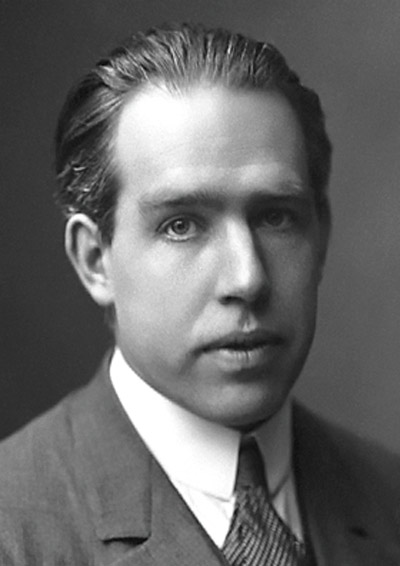 The Bohr atom is a model of the atom, first described by Niels Bohr, that explains the emission and absorption of radiation as transitions between stationary electronic states in which the electron orbits the nucleus at a definite distance. The Bohr model violates the Heisenberg uncertainty principle, since it postulates definite paths and momenta for electrons as they move around the nucleus. Modern theories usually use orbitals to describe the behavior of electrons in atoms.


The puzzle of line spectra

When a solid material is heated it becomes incandescent, that is, it emits light. The same thing happens if gases and vapors are heated, or if their atoms or molecules are excited in an electrical discharge, but there is an important difference in the light produced in the two cases.

If light is passed through a prism or diffraction grating, it is split up into a spectrum, the light of different colors of which it is composed.

The spectrum of light emitted by incandescent solids is continuous, with bands of different colors merging into each other. The spectra of gases and vapors, however, are in the form of discrete lines or bands. These line or band spectra will always be the same for gas atoms or molecules of a given element, and provide a valuable method of identification for elements. For example, when hydrogen is excited in a gas discharge tube it emits its well-known line spectrum. It was to explain the line spectrum of hydrogen that Bohr put forward his model of the atom, which is still used, with modifications, to describe the atom today.

Arriving in England in the autumn of 1911, Bohr began work under J. J. Thomson in the Cavendish Laboratory at Cambridge. At this time, the main group of physicists at Cambridge, in common with many physicists in the world, thought the atom to be like a sphere of positively charged electricity, with negatively charged electrons moving about inside the sphere in such numbers that the atom was electrically neutral.

Within a few months Bohr moved to Manchester where Ernest Rutherford, one of the leading atomic physicists in the world, was professor of physics. Rutherford had just produced experimental evidence that the atom has a very small heavy nucleus, which is surrounded by electrons, so Bohr now took over the theoretical problems of Rutherford's atom in an effort to put forward an atomic model that would agree with the experimental evidence known at the time, particularly the evidence provided by the known spectra of element.

Bohr's theory may be summarized in the following two statements:

1. Electrons can only occupy certain orbits or shells in an atom. Each orbit represents a definite energy for the electrons in it.

When his new model of the atom was applied to hydrogen, the simplest atom with one electron orbiting the nucleus, it was found to give, theoretically, exactly the same line spectrum as was known to exist experimentally. Nine years later, in 1922, Bohr received the Nobel Prize in Physics for his explanation of the hydrogen line spectrum by use of his atomic model.

The importance of Bohr's revolutionary new atomic model can hardly be exaggerated and his explanation of the hydrogen spectrum has been described as one of the greatest triumphs in physics. From 1913, with little correction until the mid-1920s, the Bohr model was fundamental to all thinking in terms of the atom.