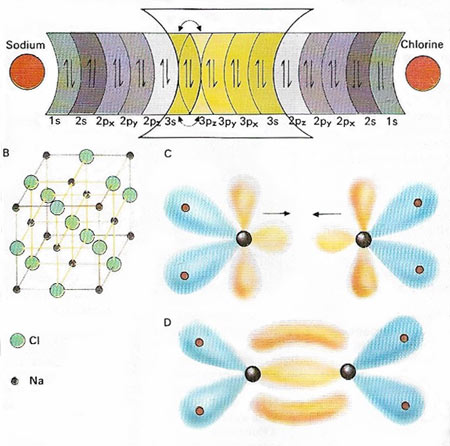 In an ionic bond (A) electrons are transferred, e.g. from the 3s orbital of sodium (Na) to the 3p orbital of chlorine (Cl). Ionic compounds often have distinct geometries in which ionic charges balance (B). But in a covalent bond two electrons in a molecular orbital are shared by both nuclei. Such orbitals have specific shapes as in the double bond (four electrons) linking the carbon atomes in ethene (C, D). The other carbon orbitals are bound to hydrogen. 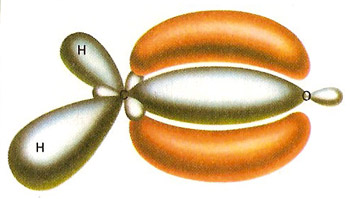 A representation of the bonding molecular orbitals in methanal (formaldehyde) (CH2O). The bonding orbitals of the carbon atom are hybridized in a planar sp2 configuration (blue-gray). Above and below the plane of the sp2 σ orbitals in the sausage-shaped high-probability regions of the C–O bond (orange).

A chemical bond consists of the links which hold atoms together in compounds. In the 19th century it was found that many substances known as covalent compounds, could be represented by structural formulas in which lines represented bonds. By using double and triple bonds, most organic compounds could be formulated with constant valences of the constituent atoms. Stereoisomerism showed that the bonds must be localized in fixed directions in space. Electrovalent compounds consist of oppositely charged ions arranged in a lattice; here the bonds are nondirectional electrostatic interactions.

The theory that atoms consist of electrons orbiting in shells around the nucleus led to a simple explanation of both kinds of bonding: atoms combine to achieve highly-stable filled outer shells containing 2, 8, or 18 electrons, either by transfer of electrons from one atom to the other (ionic bond), or by the sharing of one electron from each atom so that both electrons orbit around both nuclei (covalent bond). In the coordinate bond, a variant of the covalent bond, both shared electrons are provided by one atom.

Quantum theory has now shown that electrons occupy orbitals having certain shapes and energies, and that, when atoms combine, the outer atomic orbitals are mixed to form molecular orbitals. The energy difference constitutes the bond energy – the energy required to break the bond by separating the atoms. Molecular orbitals are classified as σ (sigma) if symmetric when rotated through 180° about the line joining the nuclei, or π (pi) if antisymmetric.

The energy and length of chemical bonds, and the angles between them, may be investigated by spectroscopy and X-ray diffraction.