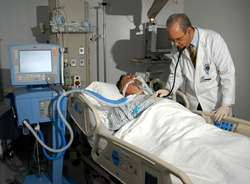 A ventilator is a machine, used mainly in hospitals, that helps people breathe. Ventilators:


Who needs a ventilator?

Ventilators most often are used:

After surgery, you may not even know you were connected to a ventilator. The only sign may be a slight sore throat for a short time. The sore throat is caused by the tube that connected the ventilator to your airway.

Once the anesthesia wears off and you begin breathing on your own, the ventilator will be disconnected. The tube in your throat also will be taken out. This usually happens before you completely wake up from surgery.

However, depending on the type of surgery you have, you could stay on a ventilator for a few hours to several days after your surgery. Most people who have anesthesia during surgery only need a ventilator for a short time, though.

You may need a ventilator if a disease, condition, or other factor has impaired your breathing. Although you may be able to breathe on your own, it's very hard work. You may feel short of breath and uncomfortable. A ventilator can help ease the work of breathing. People who can't breathe on their own also use ventilators.

Many diseases, conditions, and factors can affect lung function. Examples include:

A ventilator helps you breathe until you recover. If you can't recover enough to breathe on your own, you may need a ventilator for the rest of your life.


How a ventilator works

Ventilators blow air – or air with increased amounts of oxygen – into the airways and then the lungs.

The airways are pipes that carry oxygen-rich air to your lungs and carbon dioxide, a waste gas, out of your lungs. The airways include your:

A ventilator blows air into your airways through a breathing tube. One end of the tube is inserted into your windpipe and the other end is attached to the ventilator.

The breathing tube serves as an airway by letting air and oxygen from the ventilator into the lungs. The process of placing the tube into your windpipe is called intubation.

Usually, the breathing tube is put into your windpipe through your nose or mouth. The tube is then moved down into your throat. A tube placed like this is called an endotracheal tube.

Sometimes the breathing tube is put into the windpipe through a hole in the front of the neck. A surgeon makes the hole using a procedure called tracheostomy (or tracheotomy). The tube put into the hole is sometimes called a "trach" tube.

A tracheostomy is done in an operating room. You'll be under anesthesia, so you won't be awake or feel any pain. Specially made ties, or bands, that go around the neck hold the trach tube in place.

Both types of breathing tubes pass through your vocal cords. Thus, while a breathing tube is in your throat, it affects your ability to talk.

Endotracheal tubes are mainly used for people who are on ventilators for shorter periods. The advantage of this tube is that it can be placed in an airway without surgery.

Trach tubes are used for people who need ventilators for longer periods. For people who are awake, this tube is more comfortable than the endotracheal tube. Under certain conditions, a person who has a trach tube may be able to talk.

A ventilator uses pressure to blow air or a mixture of other gases (like oxygen and air) into the lungs. This pressure is known as positive pressure. You usually breathe out the air, but sometimes the ventilator does this for you.

A ventilator can be set to "breathe" a set number of times a minute. Sometimes it's set so that you can trigger the machine to blow air into your lungs. But, if you fail to trigger it within a certain amount of time, the machine automatically blows air to keep you breathing.

Rarely, a ventilator called a chest shell is used. This type of ventilator works like an iron lung – an early ventilator used by many polio patients in the last century. However, the chest shell isn't as bulky and confining as the iron lung.

The chest shell fits snugly to the outside of your chest. A machine creates a vacuum between the shell and the chest wall. This causes your chest to expand, and air is sucked into your lungs. No breathing tube is used with a chest shell.

When the vacuum is released, your chest falls back into place and the air in your lungs comes out. This cycle of vacuum and release is set at a normal breathing rate.


What to expect while on a ventilator

Ventilators normally don't cause pain. The breathing tube in your airway may cause some discomfort. It also affects your ability to talk and eat. If your breathing tube is a trach tube, you may be able to talk. (A trach tube is put directly into your windpipe through a hole in the front of your neck.)

Instead of food, you may be given nutrients through a vein in your body. If you're on a ventilator for a long time, you'll likely get food through a feeding tube. The tube goes through your nose or mouth or directly into your stomach or small intestine through a surgically made hole.

A ventilator greatly restricts your activity and also limits your movement. You may be able to sit up in bed or in a chair, but you usually can't move around much. If you need to use a ventilator long term, you may get a portable machine. This machine allows you to move around and even go outside, although you need to bring your ventilator with you.

Sometimes the ventilator is set so that you can trigger the machine to blow air into your lungs. But, if you fail to trigger it within a certain amount of time, the machine automatically blows air to keep you breathing.

While you're on a ventilator, your health care team will closely watch you. The team may include doctors, nurses, and respiratory therapists. You may need periodic chest X-rays and regular blood tests to check the levels of oxygen and carbon dioxide (blood gases) in your body.

These tests help your health care team find out how well the ventilator is working for you. Based on the test results, they may adjust the ventilator's airflow and other settings as needed.

Also, a nurse or respiratory therapist will suction your breathing tube from time to time. Suctioning removes mucus from your lungs. It will cause you to cough. You also may feel short of breath for several seconds. You may get extra oxygen during suctioning to relieve this symptom.


What are the risks of being on a ventilator?

One of the most serious and common risks of being on a ventilator is pneumonia. Ventilator-associated pneumonia (VAP) is linked to the breathing tube that's put in your airway when you're on a ventilator.

The tube may make it easy for bacteria to get into your lungs. It also makes it hard for you to cough. Coughing is important for helping to get rid of bacteria.

VAP is a major concern for people using ventilators because they're often already very sick. Pneumonia may make it harder to treat their original disease or condition.

VAP is treated with antibiotics. You may need special antibiotics if the VAP is due to bacteria that are resistant to standard treatment.

Another risk of being on a ventilator is sinus infection. This is more common in people who have an endotracheal tube. (This tube is put into your windpipe through your mouth or nose.) Sinus infections are treated with antibiotics.

Using a ventilator also can put you at risk for other problems, such as:

These problems may occur because of the forced airflow or higher levels of oxygen from the ventilator.

Using a ventilator also can put you at risk for blood clots and serious skin infections. These problems tend to occur in people who have certain diseases and/or who are confined to bed or a wheelchair and must remain in one position for long periods.

Another possible problem is damage to the vocal cords from the breathing tubes. If it's hard for you to speak or breathe after your breathing tube is taken out, let your doctor know.


What to expect when you're taken off of a ventilator

"Weaning" is the process of taking you off a ventilator so that you can start to breathe on your own. People usually are weaned after they've recovered enough from the problem that caused them to need the ventilator.

If you can't breathe on your own during the short trial, weaning will be tried at a later time. If repeated weaning attempts over a long time don't work, you may need to use the ventilator long term.