Modern symphony orchestras are arranged generally on the pattern illustrated here. Conductors make minor adjustments to meet special demands of the music. This happens most frequently for Romantic and modern works where the sonorities are especially important. 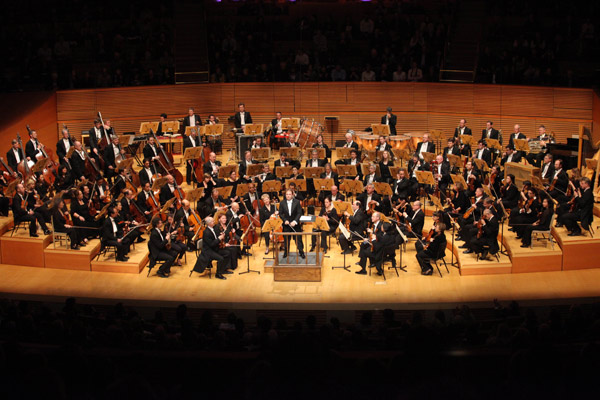 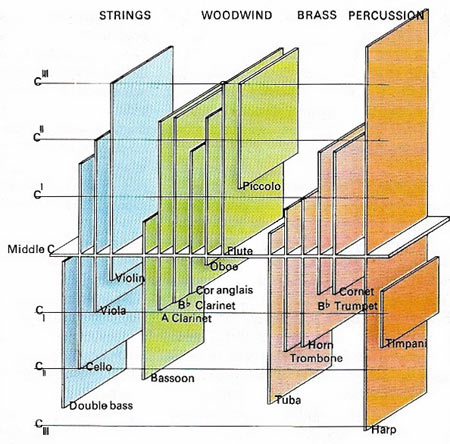 The pitch range of a symphony orchestra is fairly evenly represented across the various sections – strings (blue), woodwind (green), brass (beige) – except for percussion (brown).

An orchestra is a large group of string, woodwind, brass and percussion instruments. The term is usually used as a shortened form of symphony orchestra, but can equally refer to other forms such as a mandolin orchestra or a gamelan orchestra.

The best-known of all classical ensembles, the symphony orchestra, developed from the expansion of the chamber orchestra in the 1820s and 1830s, when composers such as Beethoven and Hector Berlioz (1803–69), and later Franz Liszt (1811–86) and Richard Wagner (1813–83), added more instruments to increase the volume of sound and the number of available tone colors. The main difference from the chamber orchestra is its use of a full brass section of three trumpets, four horns, three trombones and a tuba, which was possible after valved brass instruments became commonly available in the 1840s. To match the extra volume this created, there also tend to be more string players, and usually three or more of each woodwind instrument rather than two. Extra color is added through doublings on piccolo, cor anglais, bass clarinet, and contrabassoon. One or two harps and two or more percussionists, playing instruments such as side drum, bass drum, cymbals, triangle, and tam-tam, are often found in addition to the timpani.

Toward the end of the nineteenth century, composers such as Richard Strauss (1864–1949) and Mahler expanded the orchestra even more – sometimes writing for four of each woodwind instrument, six or eight horns and very large brass and percussion sections, and sometimes extra groups of trumpets and horns to play from offstage.

In the twentieth century, further instruments were introduced, especially percussion instruments, such as the piano, celeste, glockenspiel, xylophone,, vibraphone, cimbalom, and tubular bells, and occasionally an organ, saxophone, guitar, mandolin, ondes Martenot. Since about 1950, non-western percussion instruments such as marimbas, tuned gongs, tom-toms and bu-bams have become increasingly common in orchestral music. Non-western melodic instruments occasionally appear, too, with the composers Toro Takemitsu (1930–96) and Tan Dun (b. 1957), for instance, writing for traditional Japanese and Chinese instruments in their scores. Music technology has also found its way into the orchestra, with pieces for per-recorded tape and orchestra by Stockhausen and Luciano Berio (1925–2003) dating from the 1950s. Electronic instruments have included synthesizers, samplers, and electric guitars, while amplification and occasionally live digital manipulation of sounds are sometimes employed.

Consisting of groups of first and second violins, violas, cellos and double basses, the string orchestra is one of the oldest present-day classical ensembles. When the violin family started to expand in the sixteenth century, the string orchestra soon began to replace viol consorts for ensemble music, as it had greater projection, which made it far more effective at accompanying dancing. 'Violin bands' were favored at the French court of the seventeenth century and as the Baroque period progressed, string orchestras became commonplace fixtures in royal courts throughout Europe, often with a violinist-composer such as Jean-Baptiste Lully (1632–87) or Arcangelo Corelli (1653–1713) as its figurehead.

Baroque string orchestras were usually directed by a harpsichord player, but these began to disappear with the change in musical styles from Baroque to Classical, in the second half of the eighteenth century. After a period of relative neglect in the nineteenth century, the string orchestra made a comeback in the twentieth century. Famous works for string orchestra include Mozart's Eine Kleine Nachtmusik, Bartok's Divertimento and Krzysztof Penderecki's (b. 1933) Threnody for the Victims of Hiroshima, which uses unconventional effects such as plucking behind the bridge and hitting the bodies of the instruments.

The chamber orchestra emerged from the practice of occasionally adding wind instruments to the Baroque string orchestra in the seventeenth and early-eighteenth centuries. Composers such as George Frideric Handel (1685–1759) and Johann Sebastian Bach (1685-1750) might reinforce the bass line with a bassoon, give solo parts to oboes, flutes and horns, and use timpani and trumpets to flesh out tutti sections. By around 1770, pairs of oboes, bassoons, horns and timpani were more or less standard fixtures in the classical orchestra of Haydn and Mozart and over the next three decades, pairs of flutes, trumpets and clarinets became permanent and string sections increased. This arrangement lasted from about 1800 to 1830, and composers such as Beethoven and Schubert wrote the majority of their orchestral works for this instrumentation. After a period of dominance by symphony orchestras, financial considerations led to chamber orchestras making a comeback in the 20th century.

While professional chamber and symphony orchestras mainly give public concerts, there are many other types of orchestra – similar in make-up – that perform other functions. In the nineteenth century, orchestras were formed specifically to accompany dancing, particularly waltzes, and often went on foreign tours. The Austrian waltz composers, Johann Strauss I and Johann Strauss II, were masters of this genre and their works are still popular today. This tradition was followed by a whole stream of 'light' orchestras, which tended to play more accessible, non-symphonic music and were associated with forms of popular entertainment such as dancing, operettas, music-hall entertainment, and, in the twentieth century, film music, musicals and, before the arrival of rock 'n' roll, the music of popular singers and crooners.

In the nineteenth century, they were roughly the same size as chamber orchestras, although freer in make-up. With the arrival of jazz and then popular music in the twentieth century, they began to incorporate many popular influences. Orchestras in American musicals, for instance, often combine features of the big-band style such as the use of the piano, saxophones, drum kit and jazz trumpet and trombone techniques with a rich string sound, often omitting instruments such as oboe and bassoon.

The huge costs involved in running orchestras, together with the growing popularity of rock music and the increased use of recorded music in live situations, meant that the number of light orchestras declined steadily from the 1960s. Today, it would be virtually unthinkable to hire an orchestra for a television show, whereas is the 1970s this was commonplace.

development of the orchestra