development of the orchestra 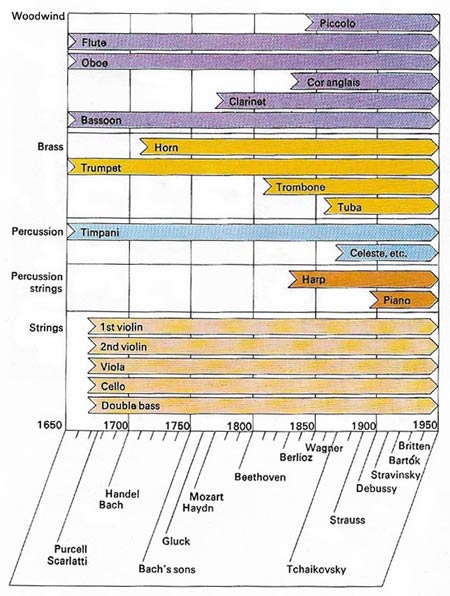 The historical growth of the orchestra began in the 17th century when the nucleus of the violin family became standardized. Other groups of instruments were added as they were developed and as influential composers wrote parts for them. Horns came into the orchestra from the hunting

While by the sixteenth century there already existed a body of secular instrumental music, it was slight compared to the wealth of choral music sponsored by the Church. The growing patronage of secular works, especially opera and ballet, required accompaniment by instrumental groups, most of which were temporary, although several permanent ensembles had made their appearance by the early seventeenth century.

Various combinations of instruments had been popular from the sixteenth century. Some were of one family, such as the viol or recorder families, and were called consorts. A 'broken' consort might include instruments of other families to lend a more lively character to a rather bland sound.

The development of opera in Italy led composers to more colorful use of instrumental groups. Claudio Monteverdi (1567–1643), in his opera Orfeo (1607), used an orchestra consisting of 15 keyboard instruments, brass, strings, and woodwind. He left to the music director the choice of which instruments should play which parts of his music, with the exception of sections where he specified the use of trombones for music associated with Hades. His understanding of orchestral sound was not entirely new. About ten years earlier Giovanni Gabrieli (1557–1612) specified instruments to play parts in Sacrae symphonie (1597), possibly the first work scored in such detail.

The improved quality and brilliant sound of the violin in the second quarter of the sixteenth century overwhelmed the viol family, although one descendant of the viol, the double bass, has survived. The violin family produced the sound that was to be fundamental to the symphony orchestra. Les Vingt-quatre Violons du Roi that played under the direction of Jean-Baptiste Lully (1632–1687) was one of a few such ensembles to play in the courts of Europe.

Throughout the seventeenth century, composers used a thorough (through or continuo) bass in writing for orchestra. The continuo instrument, usually a harpsichord or an organ, 'filled in' harmonics where there was no instrument free to play a certain part or in places where the part needed support.

By the late seventeenth century the four-part string orchestra – first and second violins, violas, and cellos – was well established. The double bass at first played the cello line an octave lower. The instrument was regularly a part of the orchestra by the mid-eighteenth century, but was not a standard form until the Italian model with four strings won general recognition in the late nineteenth century.

To the strings various instruments were added until certain of them found lasting places in the orchestral establishment. First and second oboes and bassoons added woodwind tone in the seventeenth century. At first the bassoon took a bass role but later came to play tenor parts. From about 1650 oboes 'doubled' the violin parts, but virtuoso players soon individualized.

The flute appeared in early orchestras. Its vertical forms, the recorders, were ousted by the oboes and the transverse flute, which owed much to the French craftsmen and musicians in improving their mechanics. The final addition to the orchestral woodwind families was the clarinet, invented by Johann Denner (1655–1707) in about 1700.

The principal woodwind instruments had some variants which gained regular orchestral places: the oboe's cousin, the cor anglais, with its deeper tone became a popular instrument with Romantic composers seeking fresh tone colors; the bass flute and bass clarinet were used occasionally and the piccolo added sparkle to wind sections.


The brass and percussion families

By the time Bach wrote his first Brandenburg Concerto (1721) the French horn had joined the orchestra. The trumpet had already won a place, usually playing at the top end of its range. French horns were often grouped in pairs with oboes in a woodwind section. Wolfgang Mozart wrote 19 of his first 40 symphonies for orchestra whose wind sections were of oboes and horns only. The trombones, used in late eighteenth-century opera orchestras, entered the symphony orchestra 50 years later.

The invention, in Germany, of valves for brass instruments in about 1815 meant that they could produce semitone scales throughout their ranges without fitting alternative lengths of tubing every time the music changed key. More percussion instruments were added as Romantic and post-Romantic composers explored the possibilities of orchestral color.

The discipline of orchestras had not always been as high as the standards established by Johann Stamitz (1717–1757) in Mannheim, whose orchestra was compared favorably by Mozart to his "rabble of players". By the early nineteenth century the leadership of orchestral performance was outgrowing the situation where the leader of the violin section controlled a performance. In 1828 Ludwig Spohr surprised orchestra and audience in London when he directed the orchestra with a baton, apparently for the first time. Hector Berlioz (1803–1869) and Wagner pleaded for improved performance, and the middle classes, flocking to the new concert halls, made long rehearsal time and full-time orchestras financially possible.