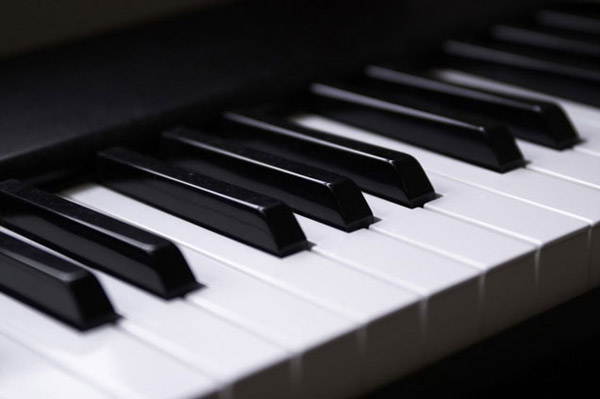 A keyboard is device with keys resembling those on a piano used to play an instrument. The keys are part of a set of levers used to remotely operate a sound-producer; other keyboard instruments include the organ, harpsichord, and accordion.

In the history of musical instruments, the keyboard is something of a Johnny-come-lately, having first appeared some 2,250 years ago.

The earliest instrument of all is the human voice, and some form of rudimentary percussion probably came next. The plucked string – ancestor of the harpsichord family – is likely to have arrived with the firing of the first arrow, if not before; the wind family with a blade of grass clasped between the thumbs; the brass with the sounding of a conch shell. a ram's horn with the tip broken off, or something similar. What binds all these together, models and families alike, is the direct contact between the player and the source or sound – something the keyboard player entirely lacks.

clavichord) to the incredibly complex (the grandest organs and the most advanced electronic instruments), but the basic principle of them all can be seen in action in every children's playground containing a see-saw: a rigid bar (key) pivoted on a fulcrum. When one end goes down, the other goes up, and vice versa. The complications and greatest subtleties arise from what is attached to that hidden end of the key.

The player's end is generally covered in ivory (now rare) or a plastic imitation. Mounted on the hidden end is the mechanism through which the strings or pipes of a keyboard instrument are sounded when the key is depressed. The technical term for this device is 'action', though the same term is used to describe the whole set-up – bar, fulcrum, and sound-producing mechanism as a single unit.

In the harpsichord family, the name 'jack' is given to that part of the action that carries the plectrum upwards, causing it to pluck the string. In the clavichord, the plectrum is replaced by a tangent, which remains in contact with the string for as long as the key is depressed. In the piano, the sound-producer is a hammer whose head is covered in felt, some lighter fabric, or leather. The much-used term 'dampers' refers to the pads of felt or other cloth that normally rest on the strings, preventing them from vibrating unless the key is depressed or, in the piano, when the sustaining or sostenuto pedal is depressed, lifting all or some of the dampers as desired.

The earliest keyboard instrument was the organ, but when contemplating the youth of this 'king of instruments'. as Wolfgang Amadeus Mozart (1756-91) called it, visions of parish choir-masters, devout Kapellmeisters or cathedral virtuosos should be banished. Some scholars believe that the German term klavier or clavier – a generic term for all keyboard instruments – may have derived from the Greek word celava which means 'club'. The keys in most of the earliest organs were not so much played, in the modern manner, as roundly thumped. Nor did they much resemble keys as we know them. In the water organs of Roman times they were a row of simple levers, requiring the full force of a man's fist to push them down. The organ, however, early parted company with simplicity, becoming one of civilizations most complicated machines, with hundreds – even thousands – of parts, it sometimes required three able-bodied men to subdue it.

Early organs were so large and complicated to use that organists were sometimes known as 'organ beaters'.

Great music, however, like great pianists, had played a relatively minor role in the piano's history. For nearly 150 years it scored its most resounding success as a status symbol all over the world. On top of uprights or within piano benches throughout the western world, it was common to find leather-clad volumes of collected sheet music. Just occasionally these included a sonata by Mozart or Beethoven, but far more typical of them was the century's runaway bestseller, composed by Thekla Badarzewska (1834-61), an obscure Polish woman of small talent.

The phenomenal success of the Maiden's Prayer seems attributable solely to its title and its subsequent packaging. The piece itself is of no distinction – outclassed even within its genre by literally thousands of better efforts by composers with equally undistinguished credentials. Who can wonder, then, at the American writer Ambrose Bierce's definition of the piano in his Devil's Dictionary (1906): 'Piano, noun. A parlor utensil used to subdue the impenitent visitor. It is operated by depressing the keys of the instrument, and the spirits of the audience'.

The perpetrators of this is domestic misery were usually young women of marriageable age, whose doubtful prowess at the keyboard was held to be proof of both of their respectability and of their father's prowess in the marketplace. Its role as an agent of seduction, by both sexes, is well documented in the literature of two centuries, as is its neglect once the ploy had worked. Its death knell, was sounded with the advent of electronic instruments. Despite this, however, it seems that the piano is here to stay.

The piano was so popular in the United States at the turn of the nineteenth century that one architect designed an entire block of flats in New York's Harlem district with an upright piano built into the walls of every one.

A keyboard controller is a keyboard instrument that sends MIDI data, but creates no sounds itself.

A keyboard workstation is a combination of several MIDI components in one unit, such as keyboard, sequencer, sample player, and effects processor.