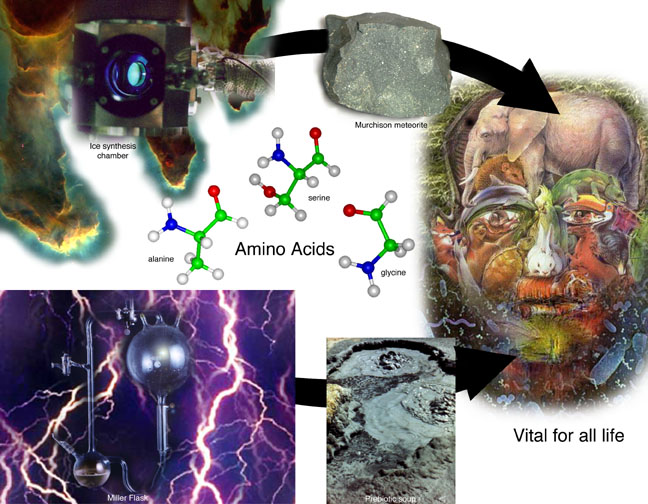 Astrochemistry is the study of the chemical interactions between the gas and dust of the interstellar medium. Astrochemistry began with the observation of neutral hydrogen's 21-centimeter line, which revealed an abundance of hydrogen between the stars. Since that time, more than 130 types of interstellar molecule have been detected. Scientists are now expanding their search to more complex, organic (carbon-rich) molecules that may hold the key to how life began.

Giant molecular clouds (GMCs) contain enormous numbers of molecules. Throughout most of their volume, pressures, densities, and temperatures are extremely low – a tiny fraction of those found here on Earth. Comparing molecular processes in GMCs with those on Earth gives insight into how our planet's chemistry evolved given its unique environment. Molecular evolution in space involves several chemical reactions, each tending to yield more complex molecules than the previous. Forged in the cores of stars, then returned to the interstellar medium by way of stellar winds, planetary nebulae, and supernovae, elements such carbon, oxygen, hydrogen, and nitrogen combine to form hydrogen cyanide, water, and ammonia. Evidence is mounting that these molecules could, in turn, combine to produce simple amino acids, one of the main chemical building blocks of life. For decades, astronomers have debated whether the molecules of life were formed in the depths of space or evolved amidst the violent volcanic eruptions and severe lighting storms that raged on the young Earth. While this issue remains hotly debated, evidence is mounting that at least some of life's precursor molecules are formed between the stars. Embedded in meteorites and moon rocks, some amino acids may have been first created in interstellar space (see amino acids in space), then frozen in meteors that bombarded Earth during its early history. In hopes of unmasking more evidence, astronomers are searching for amino acids and other complex organic molecules in the cold, molecular gas found in some regions of our own Milky Way Galaxy. One such region is Sagittarius B.