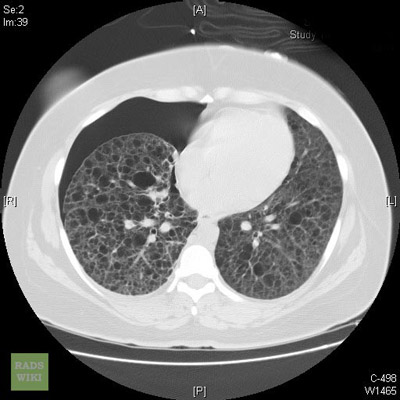 CT image of a patient with lymphangioleiomyomatosis
Source: Radswiki.net.

Lymphangioleiomyomatosis, also known as LAM or LAMS, is a rare lung disease that mostly affects women in their mid-forties.

In LAM, an unusual type of cell begins to grow out of control throughout the body, including in the lungs, lymph nodes and lymph vessels, and kidneys.

Over time, these LAM cells form cysts and clusters of cells, which grow throughout the lungs and slowly block the airways. They also destroy the normal lung tissue and replace it with cysts. As a result, air cannot move freely in and out of the lungs, and the lungs cannot supply enough oxygen to the body's other organs.

There currently is no cure for LAM.

The most common cause of death from LAM is respiratory failure.

There are two forms of LAM:

The term "lymphangioleiomyomatosis" comes from the Greek. "Lymph" and "angio" refer to the lymph vessels, and "leiomyomas" refers to the type of cells involved in LAM.

Much has been learned about LAM in recent years. It is now possible to diagnose the condition earlier and provide support services that improve patients' quality of life. Not too long ago, it was thought that the life expectancy for women with LAM was less than 10 years following diagnosis. We now know that some patients with LAM may survive for more than 20 years.

Researchers do not know what causes LAM, or why it affects mostly women. They have recently discovered that LAM has some of the same features as another rare disease called tuberous sclerosis complex (TSC). This discovery has begun to provide some valuable clues about what causes LAM.

The common features of LAM and TSC are:


TSC is a genetic disease. It is caused by abnormalities, or defects, in one of two genes. These genes are called TSC1 and TSC2. Normally, they make proteins that control the growth of the cells in the body. In people with TSC, the genes are abnormal, and the proteins that they make cannot control cell growth and movement.

LAM patients also have abnormal versions of the TSC1 and TSC2 genes, and researchers have discovered that these genes play a role in the development of LAM. More research on the TSC genes and the proteins that they make should shed new light on the causes of LAM.

Since LAM mostly affects women in their mid-forties, it is thought that estrogen also plays a role in causing LAM.

LAM mostly affects women in their mid-forties. More than 7 out of every 10 patients are between the ages of 20 and 40 when they begin to have symptoms. But LAM may occur in women as old as 70 to 80. There are also a few reports of LAM occurring in men.

Today, about 675 women in the United States have been diagnosed with either LAM alone or LAM with tuberous sclerosis complex. Scientists believe that many more women have LAM, but they have been misdiagnosed with another more common lung disease, such as emphysema, asthma, or bronchitis.

Since LAM affects about 3 out of every 10 women with TSC, there may be as many as 10,000 women in the United States who have TSC and undiagnosed LAM. Many of these women may have mild cases of LAM that are not causing symptoms. Not all TSC patients who have LAM have lung problems.

The signs and symptoms of LAM are caused by the uncontrolled growth of the LAM cells.

The most common signs and symptoms are:

LAM also can lead to other serious conditions:

Many women with LAM also have:

Other diseases can cause many of these signs and symptoms and complications, so it is important that a doctor be consulted.

Methods for diagnosing LAM have improved, and it is now possible to diagnose it at an early stage.

Many of the signs and symptoms of LAM can be caused by other diseases such as asthma, emphysema, and bronchitis. It is important for your doctor to rule out those conditions before making a final diagnosis.


Some doctors recommend that once a patient is diagnosed with LAM, she have magnetic resonance imaging (MRI) of her head. This test can show if there are signs of tuberous sclerosis complex (TSC) or a growth in the brain called a meningioma. About 1 out of every 20 patients with LAM has this kind of growth. It also appears in people with TSC.

The National Institutes of Health is studying whether blood tests for the TSC1 and TSC2 genes may be helpful in diagnosing LAM patients.

There is no treatment available yet to slow or stop the growth of the cell clusters and cysts that are the major feature of LAM.

Most treatments for LAM are aimed at relieving symptoms and preventing complications.

Since many women with LAM are now living so much longer, doctors also focus on treating other health problems that happen with menopause and aging.

The main treatments for LAM are:

Some medicines may help open your lungs so that the patient can breathe more easily.


Women with LAM have a greater chance of developing osteoporosis (a condition that causes bones to become weak and brittle) than other women. If a person has LAM, her doctor should measure her bone density. If she has lost bone density, the doctor may prescribe drugs that prevent bone loss. He or she also may prescribe calcium and vitamin D supplements.

Physicians who think that estrogen may play a role in the development of LAM usually treat their patients with hormone therapy.

If the level of oxygen in a patient's blood is low, she may need oxygen therapy. Oxygen is usually given through nasal prongs or a mask. At first, oxygen may be needed only while exercising. It also may help to use it while sleeping. Over time, full-time oxygen therapy may be needed.

A doctor may give a standard exercise stress test or a 6-minute walk test to find out whether oxygen is needed while exercising. A blood test will show what the oxygen level is and how much oxygen you need.


procedures to remove air or fluid from the chest or abdomen

Several procedures help remove air or fluid from the chest and abdominal cavities and prevent them from building up in the chest cavity.

If a patient has ongoing severe pain or bleeding caused by AMLs, surgery to remove some of the abdominal growths may be helpful. If the bleeding is not too severe, an experienced radiologist can often block the blood vessels feeding the AMLs. This may cause them to shrink.

Lung transplantation has a high risk of complications.

Researchers are now studying several medicines as possible treatments for LAM, including rapamycin.

Rapamycin (sirolimus) is the first drug to show promise as a treatment that will slow or stop the development and growth of the LAM cell clusters. Doctors now use it to prevent the immune system from rejecting kidney transplants. Researchers are looking into whether this medicine can reduce the size of kidney AMLs in LAM and tuberous sclerosis complex (TSC) patients. They also are planning a larger study of the effects of rapamycin, or another drug like it, on TSC and LAM patients. This study will test whether the drug can prevent or reverse the growth of the LAM cell clusters and cysts in other organs and slow the decline of lung function.