In the Ordovician period living things had greatly diversified from earlier times (as shown in Fig 1 and 2) and their fossils are abundant. A deep sea trough covered the area of the British Isles separating land masses of rising mountains in the north from low relief in the south. The restoration shown here is based on an upper Ordovician fauna from Scotland. The seas toward the edge of the trough contained trilobites that grew up to 30 cm (12 in) long such as Proteus (1), Tetraspis (2), Phillipsinella (3), Paracybeloides (4), Spherocoryphe (5), and Remopleurides (6); brachiopods such as Sampo (7) and Raphinesquina (8); snails such as Cyclonema,/ (9), and Sinuites (10); bivalves such as Byssonychia (11); shelled cephalopods such as Orthoceras (12); and echinoderms such as Aulechinus (13) and the sea lilies (14). This area persisted into Silurian times and fauna remained very similar. 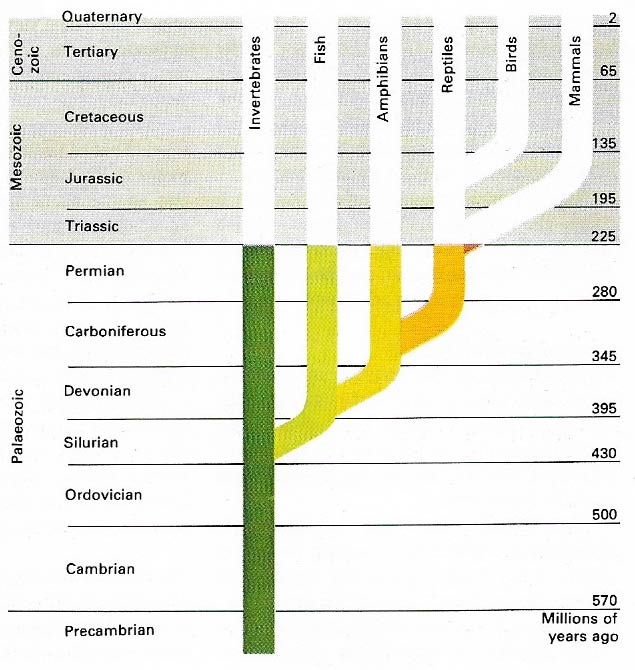 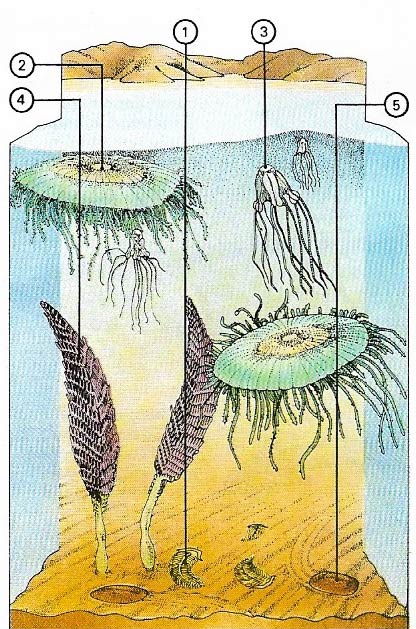 Fig 2. Really ancient fossils dating from before the Cambrian period, some 570 million years ago, are extremely rare. This is because organisms before that date were simple and lacked hard parts that fossilized easily, and also because rocks older than this are usually badly deformed, destroying all traces of organic remains. But occasionally individual organisms such as lime-secreting algae are found in these ancient rocks, some of which are 2,500 million years old. The best Precambrian fossil assemblage so far discovered dates from just before the beginning of the Cambrian and was found at Edicara in South Australia. The rocks indicate that there was a shallow sea environment with a sandy bottom inhabited by soft-bodied creatures such as worm-like Spriggina (1); Eoporpita (2), and Kimberella (3), jellyfish; Arborae (4), a sea pen; and Dickinsonia (5), an invertebrate of uncertain affinities. 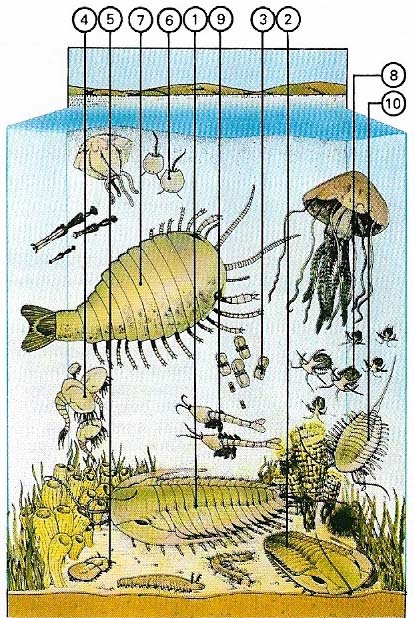 Fig 3. Fossils of the Cambrian period are more widespread because many groups of organisms developed preservable hard parts. The most prominent of these were the arthropods, including the jointed trilobites. Cambrian fossils have been found in all parts of the world but a particularly good fauna of approximately 70 genera is known from the middle Cambrian Burgess shales of British Columbia. This rock sequence indicates a deep-water environment that was suddenly poisoned by a seepage of gas. Among arthropods found there are trilobites such as 20 cm (8 in) Olenoides (1) and Ogygopsis (2), and 2 cm (0.75 in) Agnostus (3). Other arthropods include malacostracans (4), Naraois (5), Burgessia (6), Sidneya (7), Marella (8), Waptia (9), and Emeraldella (10). As well as these there were sponges, worms, jellyfish, and seaweeds. It is though that this fauna is typical of the middle Cambrian, although the mode of preservation is typical. 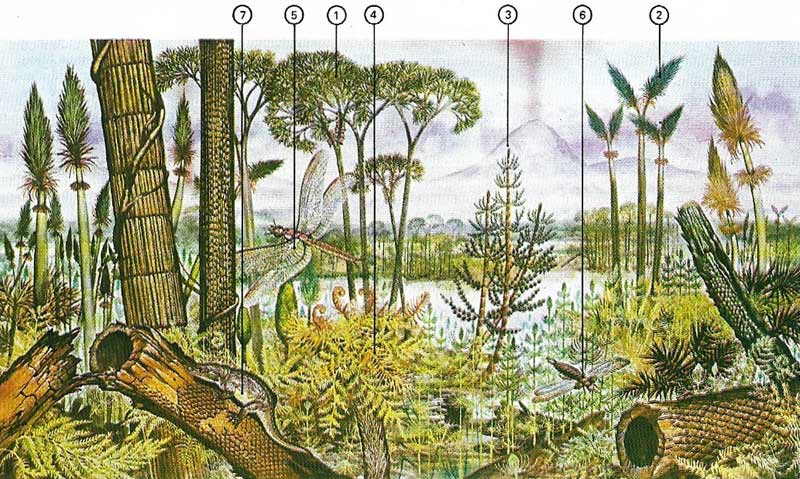 Fig 4. During the Carboniferous period there was considerable erosion of newly-raised mountain chains and the debris that was washed off them formed vast deltas in the Northern Hemisphere. These deltas supported the great coal forests consisting of primitive plants grown to tree size. Some of the common plants included tree-size club-mosses such as Lepidodendron (1) and Sigillaria (2), horsetails, Calamites (3), and tree ferns, Medullosa (4). The animal life included giant insects such as Meganeura (5) and Stenodictya (6), and amphibians such as Diplovertebron (7). 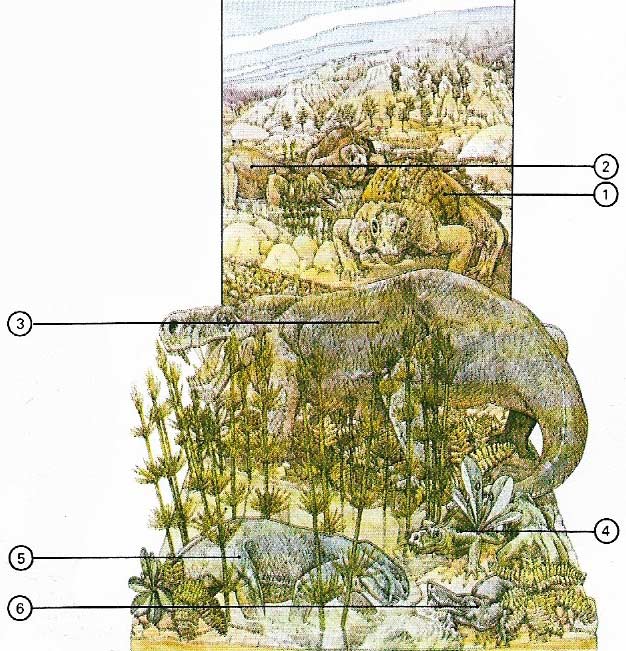 Fig 5. Permian deserts of the southern continents were at times subjected to ice ages. In between these glacial periods, they supported a sparse vegetation of horsetails, conifers, ferns, and seed-ferns. Among these lived a variety of reptiles that ranged from the extremely primitive to others that displayed advanced mammal-like characteristics, showing them to be the ancestors of the mammals to come. Faina found i the Permian beds include primitive reptiles such as Pareiasaurus (1) and mammal-like types such as Endothodon (2), Lycaenops (3), Hofmeyria (4), Dicynodon (5), and Choerosaurus(6).

Evidence of life on Earth has been found in rocks three billion years old, but it is only since the beginning of the Cambrian period some 570 million years ago that the record has been clear. Before then all living things were soft-bodied and they fossilized only under exceptional conditions (Fig 2). After the beginning of the Cambrian, several groups of animals developed hard parts that were easily fossilized, and since then enough remains have been preserved to provide a detailed picture of ancient environments.

During the Cambrian period (Fig 3), a time of low lands and mild climates, the most prominent creatures were arthropods (joint-legged animals) of various types, the most important of which were the trilobites (insect-like creatures that lived in the sea). Because of their great age, Cambrian rocks provide only fragmentary fossil evidence, but enough exists for quite detailed environments to be reconstructed with some accuracy.

The Ordovician deposits (top illustration), 500 million years old, indicate that there was a great submergence of the lands with the speed of shallow seas. Fossil evidence from the seas shows that the arthropods continued to develop and there had arrived on the scene a number of cephalopods (molluscs), some of them very large with shells and tentacles. The most prominent shellfish during these times were the brachiopods, which only superficially resembled the more familiar bivalves. In modern times, bivalves have taken over and brachiopods are now quite rare.

The trends of life on the seabed during the Ordovician times continued into the Silurian period, 430 million years ago. In this period came the development of massive coral reefs, the rise of the first vertebrates, and the first tentative forays of primitive plants. Much dry land appeared as mountain ranges rose from the sea. Extensive deposits from the Ordovician and Silurian periods have been found in parts of Europe, North and South America, and Australasia, and it is because such detailed remains have been found in particular localities that the ecology of entire periods can be reconstructed with a high degree of accuracy.

Life began to reach the land in earnest during the Devonian period, 395 million years ago. The land plants that flourished at that time released great quantities of oxygen into an atmosphere previously too rich in carbon dioxide to support animal life out of the water. Once a certain level of oxygen had been established, the way was open for the colonization of the land by arthropods such as mites and millipedes. These were followed by vertebrates, starting with lungfish and progressing to amphibians. Most of this activity took place at the edge of shallow inland waters, away from the destructive chaos of the ocean beaches. Most fish had jaws which meant that, unlike their ancestors, they were able to bite and eat their neighbors. Many fish evolved bony armor as a means of self-protection against these and other predators. It was at that time, too, that the ancestors of the sharks appeared.

The conquest of the land by vertebrates was basically a matter of survival. The lungfish and lobed-finned fish lived in pools that periodically dried out. When this happened they were forced to move to the next water. As time passed the fish became better adapted and were able to spend much longer periods out of water. From these came the amphibians, which lived in water for only part of their life cycle. The process of mountain-building, begun in the Silurian period, reached its climax in the Devonian.


From forests to deserts

By the time the Carboniferous period (Fig 4) was under way, 345 million years ago, land plants had firmly established themselves and vast forests of ferns and giant club-mosses had spread over well-watered, fertile lowlands. These were the swamps that were eventually buried and compressed to form our present coalfields. Amphibians of many shapes and sizes slithered in the green gloom of the undergrowth, while above them, between the patterned trunks, droned enormous insects, some of them with 60 cm (24 in) wing spans. On higher ground, above the steaming valleys and deltas, a more open vegetation of ferns and primitive conifers flourished. Simple reptiles evolved from amphibian stock during the Carboniferous period, but did not become dominant until later, during the Permian period.

The transition from the Carboniferous into the Permian (Fig 5), 280 million years ago, was accompanied by a change from forest to desert conditions, together with an ice age in the Southern Hemisphere. During that time the reptiles successfully spread over the land. They had an advantage over their amphibian ancestors in that they could live entirely out of water and had better constructed skeletons. Toward the end of the period some reptiles developed mammal-like features.