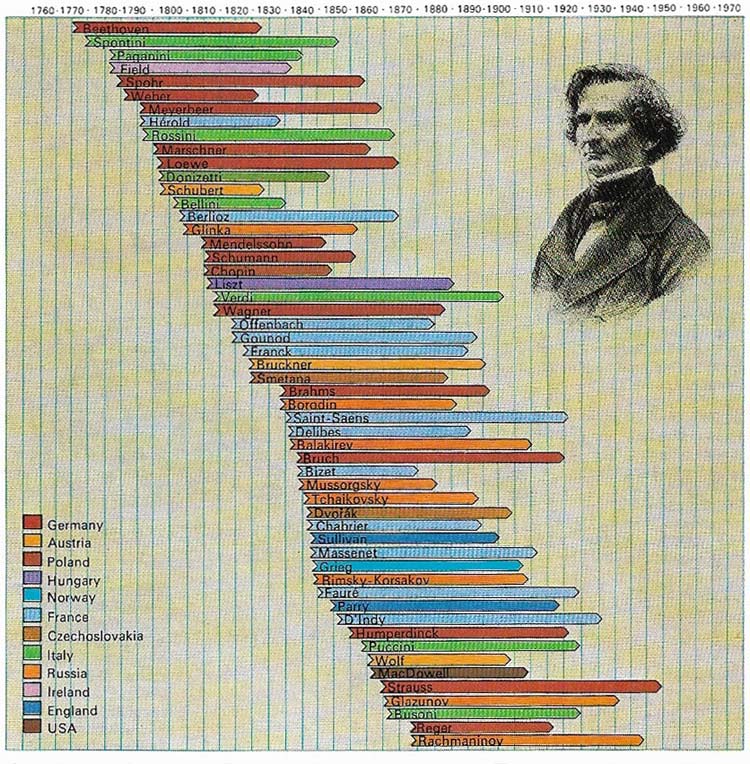 Romantic music, initiated by Beethoven, was still finding a powerful exponent in Rachmaninov in the 1930s. The portrait is of Berlioz, who represents the most intense expression of the movement. 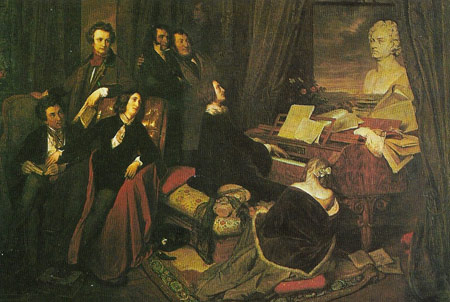 The close links between music and literature are underlined in this group portrait of several Romantic artists by Joseph Danhauser (1805–1845). Liszt at the piano is playing to the authoress and mistress of Chopin, George Sand, who is sitting beside the novelist and dramatist Alexander Dumas the younger. Standing (from the left) are the poet Victor Hugo, the violinist and composer Paganini, and the opera composer Rossini. At Liszt's feet is the Comtessa Marie d'Agoult, with whom the pianist had a lengthy affair. Beethoven's bust is on the piano, Byron's portrait on the wall. 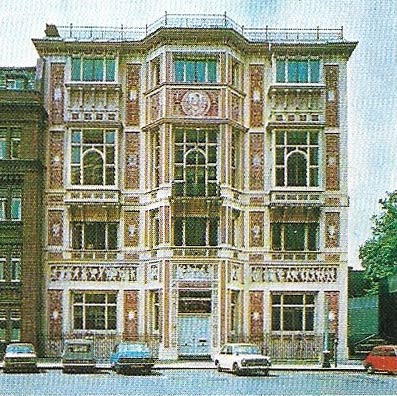 The Royal College of Organists, established in London in 1864, was just one of the many conservatories and academies of music that proliferate in Europe in the 19th century. They owed their origin to the Italian conservatorio, where orphans were taught music. Notable conservatories were founded in Paris (1784), Vienna (1817), London (the Royal Academy of Music, 1822), and Leipzig (by Mendelssohn, 1843). 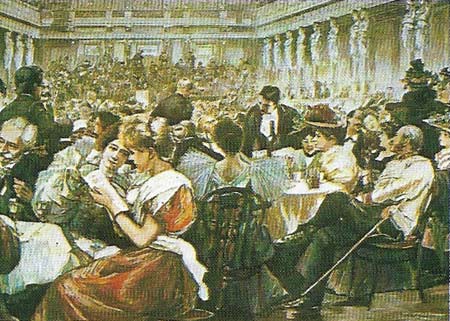 Johann Strauss the Younger (1825–1899), conducted the orchestra and presided as musical director at such typical Viennese entertainments. Described as the 'Waltz King', thanks to works such as 'On the Beautiful Blue Danube' and 'Tales from the Vienna Woods', he composed lighthearted music whose brilliance and gaiety captured the spirit of the Hapsburg capital during a 50-year period. He also composed a number of successful operettas.

The Romantic period is the musical period roughly from 1820 to 1900, in which emphasis was placed on the individual, on expression of emotion, on the idea that a work of art should be a complete entity and on the pre-eminence of the artist as genius. The music progressed to a freer, more subjective form with increasing chromaticism (see chromatic), the use of folk themes, the introduction of more virtuosic solo music, and larger orchestras. Romanticism is generally reckoned to have begun in the late 1820s and the 1830s, with Berlioz, Schumann, Chopin, and Liszt, and to have ended sometime before World War I, though its implications reverberate in music to this day. Romantic composers sought inspiration in literature and painting; abandoned or greatly modified classical procedures such as sonata form; produced operas, symphonies, and tone poems of unprecedented duration and scope; vastly expanded the resources of the orchestra; and employed ever more complex, circuitous harmonic designs.

The Late Romantic is music of the late 19th-century and early twentieth century which retains the dramatic intensity of earlier 19th century music. The music is characterized by the use of vast instrumental forces, increased chromaticism and large-scale compositions. Composers of this period included Wagner, Mahler and Richard Strauss. Rachmaninov, in the slow movement of his Second Symphony (1908), unfurled one of the quintessential Romantic phrases, even as Schoenberg was unleashing the atonal revolution.


The influence of Beethoven

Having absorbed classical elements from Haydn and Mozart (whose last three symphonies to a degree prefigure Romanticism), Beethoven embarked on a course that can be seen as a parallel in music to the emergence of the Romantic concept of the liberated individual. His third symphony the Eroica (1803–4), is a pivotal work in this respect, and revealed an impetus that was to burst forth in the power of many of his symphonies, concertos, and piano sonatas. The intense late string quartets are altogether a more intimate compression of similar emotional power.

Virtually all serious European music of the 19th century was to flourish under the far-reaching influence of this music, for Beethoven transformed the standard classical forms of sonata, symphony, concerto, and quartet that he inherited by infusing in them a musically emotional intensity. Many subsequent composers took the liberation of individual emotional expression for their starting point, rather than seeing it as the resolution of conflict through relentless and imaginative musical logic as in Beethoven; and at times Romantic music suffered the excesses of self-indulgent feeling.

Carl Maria von Weber (1786–1826) is generally credited with being the first freely Romantic composer, and also the pioneer of German Romantic opera. His often superficial piano music was destined for increasingly popular public concerts that encouraged virtuoso composers such as the violinist Niccoló Paganini (1782–1840).

At the opposite pole were the private musical evenings given by Franz Schubert (1797–1828) in Vienna. These 'Schubertiads' united poets and musicians, and saw in particular the fashioning of the Lied (song), in which Schubert's accompaniment opened new worlds of melodic and harmonic enrichment of lyrics. Yet songs were just part of the general response music was making to literature in this period, offering both attractive distant realms of order fantasy and heroism, and a framework for new ideas.

Felix Mendelssohn (1809–1847) made Shakespeare's Midsummer Night's Dream the subject of a concert overture when he was only 17, but his fresh-sounding music still drew much charm from a traditional 18th-century restraint and balance. Hector Berlioz (1803–1869), on the other hand, expressed a passion for the works of Shakespeare, Byron, Scott, Goethe, and others, and they figure in many of his orchestral and dramatic works. His Symphonie Fantastique (1830) extends the idea of a literary 'programme' to a love affair. Robert Schumann (1810–1856) drew characters from Romantic writers,

More adventurously, Franz Liszt (1811–1886) wrote "masterpieces of music which absorb those of literature", to adapt his own words, and created the symphonic poem (Tasso Mazeppa) from the combination in music of both the narrative and psychological aspects of a story or poem. Many composers were to build on this format, most notably Richard Strauss (1864–1949). Liszt's brilliant piano music also often had an outside or literary impulse.


Nationalism and the Romantics

Wagner's use of native German myths to creating a flowing music drama in place of traditional opera was eventually secondary to the pervading influence of his extremely lush, chromatic harmony and inspired use of the orchestra, almost the culmination of Romantic music. But composers such as Brahms, Anton Bruckner (1824–1896), and possibly Gustav Mahler (1860–1911) harked back to classicism.