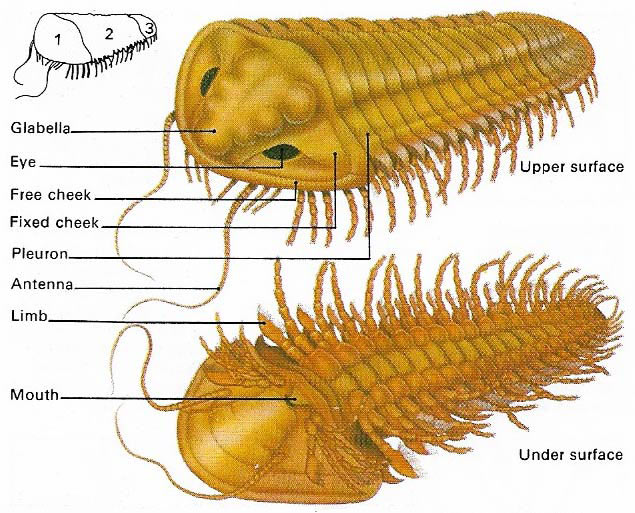 Fig 1. A trilobite looked rather like today's woodlouse, being covered by a chitinous skeleton. This was divided into a cephalon (1), or head-shield, which carried sensory organs and the glabella, a bump that housed the stomach; (2) the thorax, a region of articulated segments below each of which was a pair of legs; and (3)the pygidium or tail shield. Each limb consisted of a jointed organ for walking, a swimming and breathing organ, and a paddle that swept food particles toward the mouth. 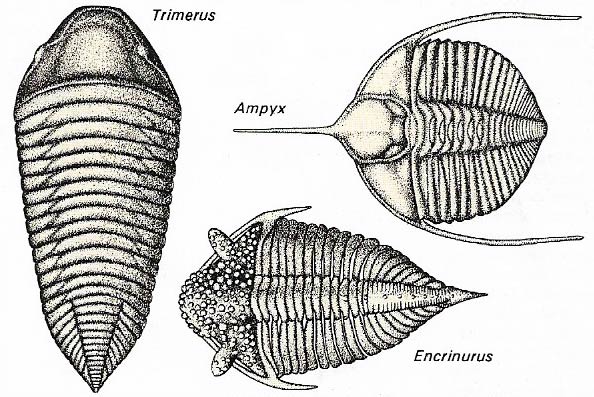 Fig 2. Trilobites adapted to their environment in a variety of ways. Trimerus was a burrower. Ampyx was a lightweight swimmer, and Encrinurus was a slow-moving bottom dweller. 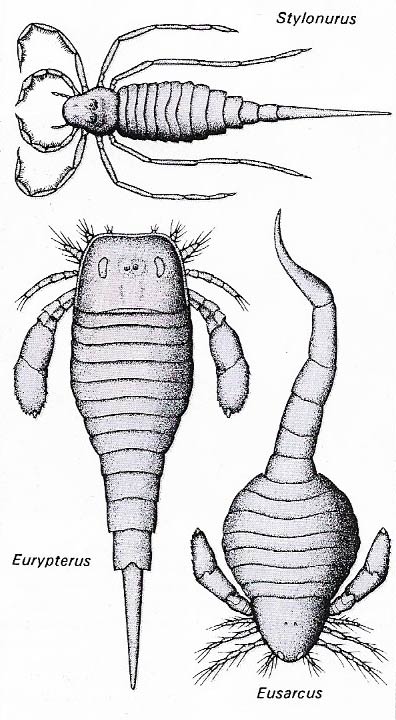 Fig 3. The eurypterids, probably related to the trilobites, included the great sea scorpions of the Silurian and the Devonian. Although some carried claws and grew to a length of 3m (10 ft), those shown here were smaller and more like today's scorpions. Stylonurus was o long-legged form found in Silurian and Devonian rocks. Eurypterus was the first of the group to be discovered and lived in the Devonian of Scotland. Eusarcus was scorpion-like. These lived only in the sea in the Silurian but later moved into fresh water.

Fig 4. Insects appeared in the Devonian and flourished in the Carboniferous. These included a dragonfly called Meganeura, with a wing span of about 80 cm (31 in); Stenodyctia, which was a generalized type; and Aphthoroblattina, a cockroach. 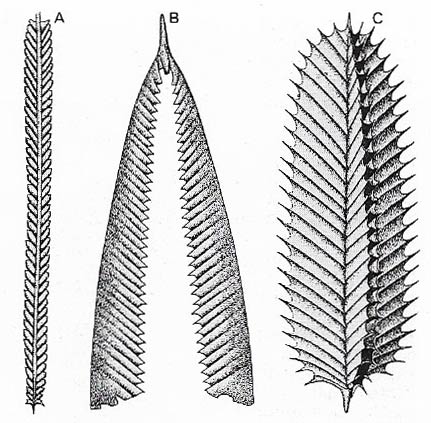 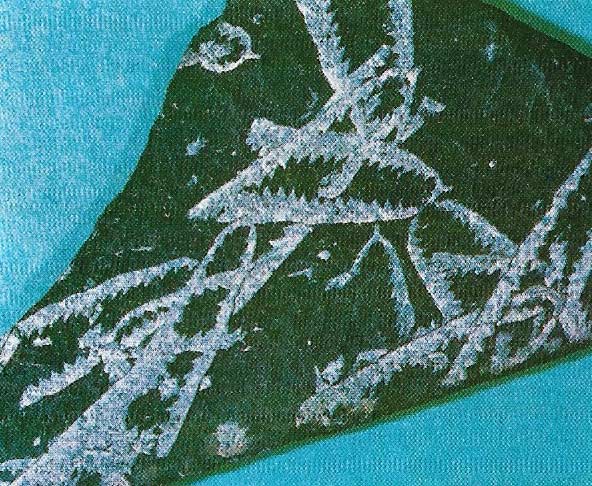 Fig 6. The rapid evolution of the graptolites and the fact that they are found all over the world makes them ideal index fossils. The presence of large numbers of Didymograptus in this shale identify it as being of lower Ordovician age. Slightly younger or older shale would have different graptolites. 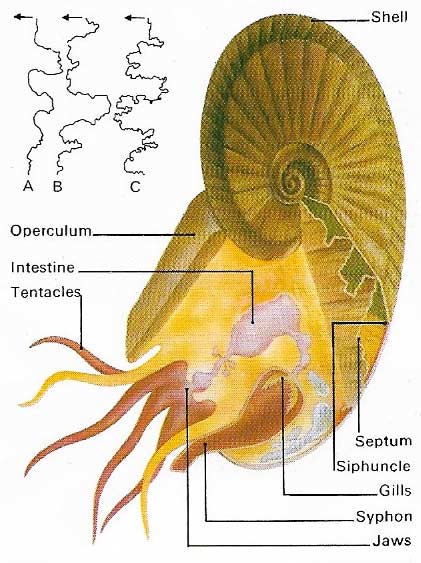 Fig 7. The ammonite had a soft anatomy similar to that of the modern nautilus, which lives in the open end of its shell. As the animal grew it secreted more shell and move forward into the new part, walling off the old section with a septum. The walled-off chambers were used for buoyancy, being supplied with air from a tissue filament or siphuncle connecting them all. The septa met the shell wall in suture lines that had identifiable patterns for each species and became more complex as the group advanced. (A) shows a primitive Ceratites suture, (B) Hildoceras, and (C) advanced Baculites. The arrow shows the position of the siphuncle and the direction in which the head lies.

The most abundant and significant fossils in the rocks of the Earth's surface are those of invertebrates. These range in size from microscopic creatures to cephalopods with coiled shells 2 m (6 ft) in diameter and in age from the early Cambrian, 570 million years ago, to historical times.

Some of the earliest fossils were those of the arthropods, which are found from the Cambrian onward. These are the joint-legged animals that have shells of chitin – today's insects, spiders, crabs, and lobsters. In Cambrian times they were represented by the trilobites (Fig 1, 2) and other strange creatures. The trilobites were generally unspecialized marine animals with bodies divided into a large number of similar segments. They appeared in the Ordovician, flourished during the lower Paleozoic, but started to wane during Devonian times and by the end of the Permian were extinct. The closely related euryterids (Fig 3) had a shorter range – Silurian to Devonian – but while they lived they were the terror of the seas. Ostracods are another important group of arthropods. They were encased in a pair of tiny, almost microscopic, shells hinged along the back. These shells had characteristic decorations and are valuable as index fossils because the distribution of each species through time is well known, so that when a species is found in a rock the age of the rock can be determined.

Arthropods were among the first animals to colonize land, the millipede Archedesmus being found in Devonian rocks. Insects evolved soon afterward, and the Carboniferous forests sheltered such creatures as Meganeura (Fig 4) – a dragonfly the size of a parrot. Unfortunately, fossil land arthropods are rarely found and consequently little is known about their evolution. It is known, however, that the arachnids and simpler insects were well established by the upper Paleozoic while the flies and social insects did not develop until the upper Mesozoic.

Mollusks are another group of organisms with a long ancestry and the tentacled mollusks – the cephalopods – have been found as far back as the Cambrian. These first cephalopods had straight, conical shells and this primitive shape, the orthocone, lasted until the Carboniferous. Meanwhile other branches of the cephalopods developed, evolving shells that were curved and, eventually, shells coiled in a tight spiral. From these nautilus-like creatures of the upper Paleozoic evolved the ubiquitous ammonites of the Mesozoic (Fig 7), the fossil shells of which are a familiar sight in Jurassic rocks all over the world. These also make excellent index fossils because of their great variety in shell shapes and ornamentation and the short time range of each species. Ammonites died out during the general change of fauna at the end of the Mesozoic and since then the only cephalopods have been the squid, cuttlefish, octopus, and nautilus.

The snails and the bivalves, the other chief members of the mollusk group, have also been present since the Cambrian but it was not until the Tertiary that the bivalves became the important "sea shells" that they are today. During the Paleozoic and the Mesozoic their ecological niche was occupied by a primitive group, the brachiopods, which superficially resembled them – being sessile (sedentary) and having their soft anatomy enclosed in two shells – but were in no way related to them.

The corals are an important group of fossil organisms and can be divided into three groups, two of which are extinct. The first group, called the rugose corals because of the wrinkled appearance of the skeleton, were mostly solitary organisms looking like the related sea anemones but encased in cup-shaped shells. Some later rugose corals were colonial, consisting of more than one individual. They appeared in the middle Ordovician, reached their peak in the lower Carboniferous and died out in the Permian. The second group, the tabulate corals, were all compound, consisting of large numbers of small individuals. They appeared in the middle Ordovician, flourished in the Silurian and Devonian, and became extinct in the Permian. The third group, the scleractinian corals, are the reef-building corals of today. They did not appear until the middle Triassic and most have been colonial.

The phylum known as the chordates, to which humans belong, includes several groups of small, apparently simple worm-like animals. An early off-shoot from this phylum may have given rise to the graptolites – communal drifting organisms that were abundant in the oceans of Ordovician and Silurian times (Fig 5). Their evolution took place rapidly from the complex types of the lower Ordovician to the straight, simple forms of the Silurian, making them good index fossils for identifying Paleozoic black shales.

The echinoderms – the starfish, sea urchins, and sea lilies – are probably close to the ancestors of the vertebrates and, because they are mostly covered with armor, they tend to fossilize easily. Certain Carboniferous limestones are made up largely of crinoid (sea lily) plates.