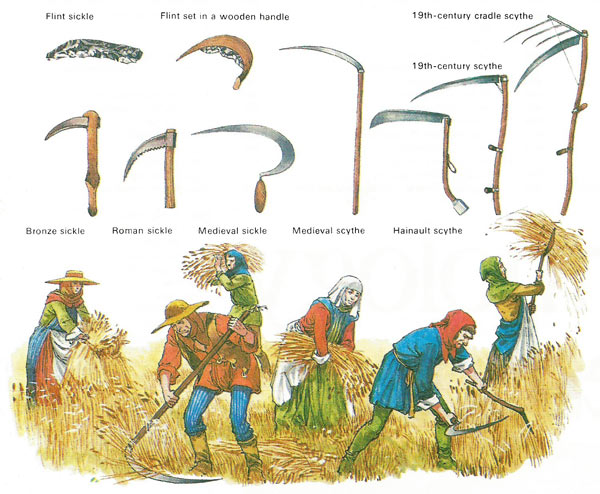 Farming tools for cutting and reaping form an unbroken sequence down the ages. The Egyptians used flint-edged wooden sickles at first and later bronze ones. By the Middle Ages the sickle had developed a curve and was set in a wooden handle. Medieval harvesters used either short-handled sickles or scythes. Later developments included the Hainault scythe still in use today. 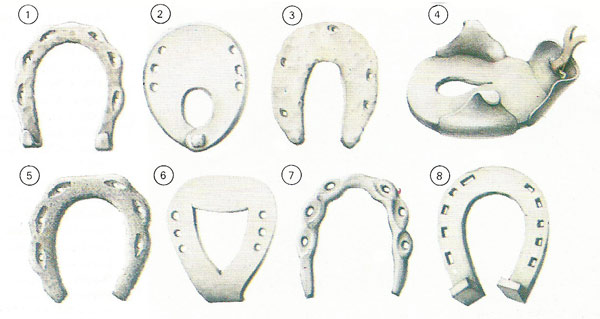 Prehistoric Celts were the first to fit horses with shoes, but heavy iron horseshoes were not common in Europe in medieval times. Horseshoes of various designs are associated with certain cultures and they achieved their final form only in the late 19th century. 1. Frankish. 2 Syrian. 3. Saxon. 4. Roman hipposandal. 5. Celtic. 6. Moorish from Algeria 12th century. 7. Roman. 8. 16th century French. 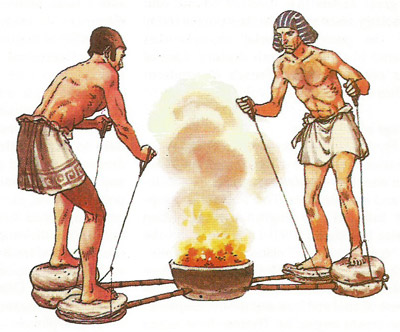 The control of fire is fundamental to technology. As early as 3000 BC, copper and tin ores were smelted in charcoal fires, refined and alloyed into bronze. Two thousand years later, iron objects were being made in Egypt and elsewhere as the result of a technique handed down by Hittite smiths. Iron could not be melted over a fire, even with the aid of bellows such as these, but it could be made red hot and then hammered into ornaments and implements. 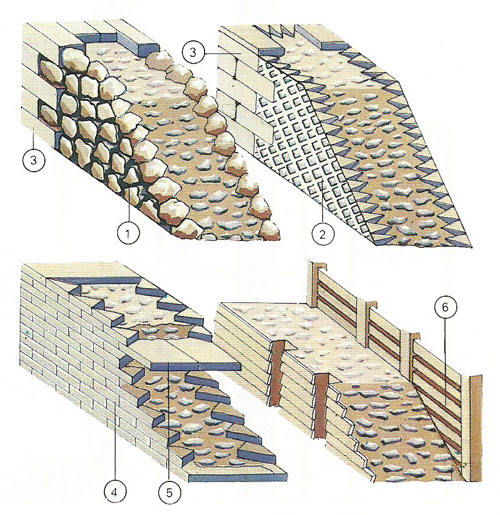 Roman wall-building included small stones laid in mortar, opus incertum (1). Opus retuculatum (2) was a later diagonal pattern. These walls had outer vertical angles finished with stone quoins (3). Opus testaceum had a brick facing (4). often strengthened by bonded tiles (5). Walls of foundations were cast in a timber framework (6), removed when the mortar had hardened.

Medieval stone masons, most of whom were employed in the building of churches and cathedrals, were among the elite of workmen and formed themselves into guilds, as did the Roman smiths before them. 1. Carving decorated stonework with hammer and punch. 2. Measuring out a design on stone with compass and rule. 3. Cutting stone with a frame saw. 4. Shaping a molding with pitching tool.

Mines became deeper and more efficient when it was possible to pump out floodwater. In the 16th-century mine, a series of lift pumps (1), similar to a village pump, were linked by levers (2) and powered by an undershot waterwheel (3). driven by a nearby natural stream or one diverted for the purpose. 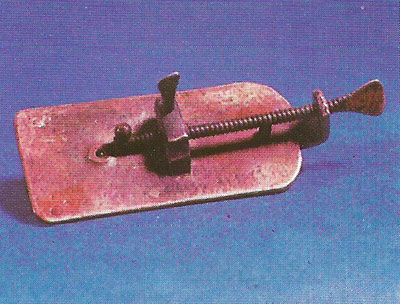 Mines became deeper and more efficient when it was possible to pump out floodwater. In the 16th-century mine, a series of lift pumps (1), similar to a village pump, were linked by levers (2) and powered by an undershot waterwheel (3). driven by a nearby natural stream or one diverted for the purpose.

Perhaps the first event in the history of technology was the making of a crude stone hand axe more than a million years ago. Another achievement of prehistoric technology was the control of fire for hardening the points of wooden tools and weapons. By the end of the Old Stone Age, some tens of thousands of years ago, human-made objects of stone, horn, bone, and wood reached high standards.

It was not until the New Stone Age, or Neolithic, however, when humans first settled down in one place, that there arose a need for a technology extending beyond the manufacture of tools, weapons, and garments.

From about 5,000 BC, technological development began to increase rapidly. In the thousand years that followed, an urban civilization arose in Mesopotamia. Plows, first with blades of stone and later of bronze, sledges for transport and buildings of baked mud were among the major developments.

By 3500 BC a number of city states were established between the Tigris and Euphrates rivers. The potter's wheel and the solid cartwheel were introduced not long after. The Sumerians also made inventories of their property in the first written records – cuneiform carvings on clay.

Mesopotamian architecture reached its peak in the ziggurats, great stepped buildings made from clay bricks laid in a herringbone pattern. The Egyptians had however earlier built monuments that were even larger, but in stone. The Great Pyramid of Cheops still stands, 148 m (485 ft) high and covering five hectares (13 acres) yet accurate in design and construction to a fraction of a centimeter. One of the greatest feats of engineering, it was built without the use of the wheel.

Far from the Middle East, other civilizations began to emerge with their own special technological achievements. In ancient China, silk was being made as early as 2000 BC, although it did not reach the West until the 6th century BC. The Indus civilization, about 2300 to 1750 BC, built the northern Indian cities of Harappa and Mohenjodaro, which had vast complexes of houses, granaries, and wells, complete with the earliest corporate drainage and sewage system.

Europe, Africa (excluding Egypt), and great tracts of Asia, however, experienced only patchy technological developments at that time. South America generated an elaborate civilization of its own, but not for another 2,000 years. The Mayan people (in Mexico) remained in a Stone Age, although they developed the most accurate of calendars and perfected an arithmetic that contained a symbol for zero for the first time.

Other parts of the world failed to develop an advanced technology: until the arrival of white settlers, Australian Aborigines continued as food gatherers, relying on nature to supply all the necessities of life.

Ancient technology, therefore, developed in fits and starts in limited areas of the world. Surprisingly, the Hellenic Greeks, in many ways the most talented of all ancient peoples, did not make great advances in technology. Although they enjoyed philosophical, including scientific, speculation they held inventions and manufacturing in low esteem, One thousand years before the Greeks, Hittite smiths in Mesopotamia had worked in iron, a technology that they handed on to many later civilizations.

Egyptian tombs were rich in objects made from pottery, wood, glass, ivory, copper, and bronze and, later, iron. During Roman times mining activities extended throughout Europe and beyond and bronze and iron were used in large quantities for armor and engines of war. After the rise of Islam in AD 622, the Arabs became the custodians of scientific ideas but, like the Greeks, they made few technological innovations.

Apart from clocks and stained-glass windows of cathedrals, Europe had contributed little new technology for hundreds of years. But the 14th century saw the start of the Renaissance, which released scientific thought from religious shackles and in doing so promoted technology.

By 1450, Johannes Gutenberg's printing press was active in Germany, European canals were busy with trade and early blast furnaces were making iron. In the 16th century mining was improved by mechanized drainage and ventilation systems. This was also the age of Galileo's telescope and many other scientific instruments.

The real breakthrough – the large-scale generation and control of energy – had yet to arrive. When it did, in the 18th century, technology advanced on many fronts. Windmills had been in use for a thousand years and waterwheels for half that time, but neither of these inventions advanced industry generally. Then three developments stimulated the Industrial Revolution; these were steam power, coal mining, and iron smelting. The application of steam power required the engines of Thomas Newcomen and the availability of coal to heat their boilers. Coal was also employed in the early 1700s by Abraham Darby (c. 1678–1717) to make coke, and this new fuel was used by him in blast furnaces to produce a plentiful supply of iron. Later the steam engine, improved by James Watt, introduced powered transport, and sulfuric acid manufacture by the lead-chamber process established the beginnings of the chemical industry.


The age of revolution

The great events that directed science and technology on to the paths they pursue today were the profound social changes that occurred in the eighteenth century. One of these events was the French Revolution; another the Industrial Revolution.

The French Revolution stressed the need for the rational conduct of human affairs. One effect was to give a strong impetus to calculation and mathematics. This French development inspired the English mathematician Charles Babbage to build the first computer-type calculating machine.

The Industrial Revolution posed new problems. Its central features were the extensive use of coal and iron and the development of the steam engine by Newcomen and Watt. Industry was thus presented with the prospect of unlimited power, and the problem of the nature of power and energy was brought to the forefront of science. The Industrial Revolution created a new demand for a knowledge of the properties of materials and a fresh motive for the development of chemistry. It made mankind aware of the possibility of fundamental change.

The Industrial Revolution stimulated a search into the principles of motion associated with other phenomena. Michael Faraday conceived the idea of the electromagnetic field to explain electrical motions. He also demonstrated the principles of the dynamo and the electrical motor. With the coming of power stations, electricity could be generated and distributed almost anywhere to factories and even individual homes. The new industries required fresh sources of new materials and so were responsible for an expansion of overseas trade. Other countries became markets for manufactured goods.

A few pioneering scientists concentrated on working out the laws of thermodynamics – the branch of physics concerned with processes involving heat changes. Sadi Carnot gave a mathematical theory to the cycles of heat changes in the steam engine, as demonstrated experimentally by James Watt. James Joule measured the mechanical equivalent of heat (how much heat is generated by a given amount of mechanical energy, and vice versa) and how various other forms of energy are interrelated. From this the concept of the conservation of energy was developed – the basic idea of physics that energy can be neither created nor destroyed, merely converted from one form into another.

James Clerk Maxwell gave expression to Faraday's ideas of lines of force acting in space in his equations of the electromagnetic field. He showed that light waves are a form of electromagnetic waves and deduced that other forms, different from light waves, might exist. One such form, now used in radio, was discovered by Heinrich Hertz in about 1887.

The new chemistry, which Antoine Lavoisier had taken the chief part in founding, was developed especially by Justus von Liebig, who had received his early chemical training in Paris. He was followed by August Hofmann, who worked for a long period in England. Hofmann had a pupil in his London laboratory, William Perkin, who at the age of 18 discovered the first synthetic chemical dye, mauve, which led to the foundation of aniline dye manufacture, at first based on coal tar. This was the start of the modern chemical industry.

Following Hertz's discovery of long electromagnetic waves, Wilhelm Roentgen discovered short electromagnetic waves in 1895 and called them X-rays. They came as a surprise to physicists. Searches were immediately made for other new rays, and in 1896 Henri Becquerel discovered that uranium emitted a new kind of radiation. Pursuing this discovery Marie Curie and her husband Pierre Curie showed in 1897 that far more powerful sources of this kind of radiation exited in the new elements that they named polonium and radium. While these researches were progressing, other scientists were investigating how electricity is conducted in gases. This culminated in the discovery of the electron by J. J. Thomson in 1897, which led to the development of the cathode ray tube valves, and the whole science of electronics.

Lawrence Bragg, working with his father William Bragg, explained how the structure of molecules can be determined by means of X-rays. Working in Bragg's laboratory, James Watson and Francis Crick discovered in 1953 the double-helix structure of the molecule of DNA, upon which one of the fundamental processes of life, the transmission of hereditary qualities, depends. Such knowledge has made genetic engineering possible and led, for example, to new strains of crop plants to help feed the world's ever growing population.