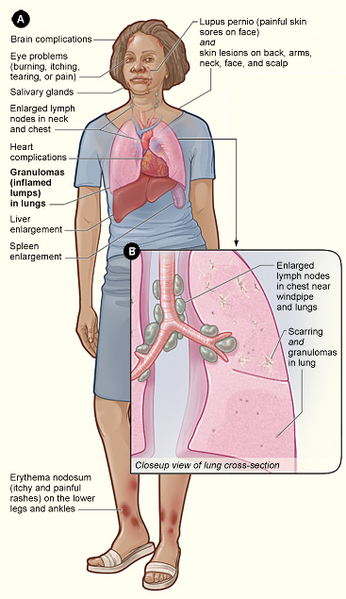 Sarcoidosis involves inflammation that produces tiny lumps of cells in various organs in the body. The lumps are called granulomas because they look like grains of sugar or sand. They are very small and can be seen only with a microscope.

These tiny granulomas can grow and clump together, making many large and small groups of lumps. If many granulomas form in an organ, they can affect how the organ works. This can cause symptoms of sarcoidosis.

Sarcoidosis can occur in almost any part of the body, although it usually affects some organs more than others. It usually starts in one of two places:

Rarely, sarcoidosis affects other organs, including the:

Sarcoidosis almost always occurs in more than one organ at a time.

Sarcoidosis has an active and a nonactive phase:


The course of the disease varies greatly among people.

Changes in sarcoidosis usually occur slowly (e.g., over months). Sarcoidosis does not usually cause sudden illness. However, some symptoms may occur suddenly. They include:

In some serious cases in which vital organs are affected, sarcoidosis can result in death.

Sarcoidosis is not a form of cancer.

There is no known way to prevent sarcoidosis.

Sarcoidosis was once thought to be an uncommon condition. It's now known to affect tens of thousands of people throughout the United States alone. Because many people who have sarcoidosis have no symptoms, it's hard to know how many people have the condition.

Sarcoidosis was identified in the late 1860s. Since then, scientists have developed better tests to diagnose it and made advances in treating it.

The cause of sarcoidosis is not known. And, there may be more than one thing that causes it.

Scientists think that sarcoidosis develops when the immune system responds to something in the environment (e.g., bacteria, viruses, dust, chemicals) or perhaps to the body's own tissues (autoimmunity).

Normally, the immune system defends the body against things that it sees as foreign and harmful. It does this by sending special cells to the organs that are being affected by these things. These cells release chemicals that produce inflammation around the foreign substance or substances to isolate and destroy them.

In sarcoidosis, this inflammation remains and leads to the development of granulomas or lumps.

Scientists have not yet identified the specific substance or substances that trigger the immune system response in the first place. They also think that sarcoidosis develops only if a person has inherited a certain combination of genes.

A person cannot catch sarcoidosis from someone who has it.

More research is needed to discover what causes sarcoidosis.

Sarcoidosis affects people of all ages and races worldwide.

It occurs mostly in:

Studies have shown that sarcoidosis is more likely to affect certain organs in certain populations. For example,

People who are more likely to get sarcoidosis include:

Many people who have sarcoidosis have no symptoms. Often, the condition is discovered by accident only because a person has a chest X-ray for another reason, such as a pre-employment X-ray.

Some people have very few symptoms, but others have many.

Symptoms usually depend on which organs the disease affects.


Parotid and other salivary gland symptoms

Sarcoidosis may also cause more general symptoms, including:

Sarcoidosis is diagnosed by taking a detailed medical history and conducting a physical exam and several diagnostic tests. The purpose is to:

A doctor will ask for a detailed medical history. He or she will want to know about any family history of sarcoidosis and what jobs a person has had that may have increased their chances of getting sarcoidosis.

The doctor may also ask whether a person has ever been exposed to inhaled beryllium metal, which is used in aircraft and weapons manufacture, or organic dust from birds or hay. These things can produce granulomas in the lungs that look like the granulomas that are caused by sarcoidosis but are actually signs of other conditions.

A doctor will look for symptoms of sarcoidosis, such as red bumps on the skin; swollen lymph nodes; an enlarged liver, spleen, or salivary gland(s); or redness in the eyes. He or she will also listen for abnormal lung sounds or heart rhythm, and will check for other likely causes of the symptoms.

There is no one specific test for diagnosing sarcoidosis. It is harder to diagnose sarcoidosis in some organs (e.g., heart, nervous system) than in others. A doctor will probably conduct a variety of tests and procedures to help in the diagnosis.

Doctors usually use a staging system for chest X-rays taken to detect sarcoidosis:

In general, the higher the stage of the X-ray, the worse the symptoms and lung function are. But there are a lot of differences among people. If the X-ray results show Stages 0, 1, 2, or 3, the patient may not have symptoms or need treatment, and may get better and have normal chest X-rays again over time.

The goals of treatment are to:

Treatment may shrink the granulomas and even cause them to disappear, but this may take many months. If scars have formed, treatment may not help, and a person may have ongoing symptoms.

A person's treatment depends on:

Some organs must be treated, regardless of the symptoms. Others may not need to be treated. Usually, if a person doesn't have symptoms, he or she doesn't need treatment, and they probably will recover in time.

The main treatment for sarcoidosis is prednisone. Prednisone is a corticosteroid, or anti-inflammatory drug. Sometimes it is used with other drugs. Sometimes other corticosteroids are used.

Prednisone almost always relieves symptoms of inflammation. If a symptom doesn't improve with prednisone treatment within a couple of months, consult your physician.

Prednisone is usually given for many months, sometimes for a year or more.

Low doses of prednisone can often relieve symptoms without causing major side effects.

When used at high doses, prednisone can cause serious side effects.

Side effects can include:

When it is time to stop taking prednisone, a person should cut back slowly, with a doctor's help. This will help prevent flare-ups of sarcoidosis and allow the body to adjust to life without the drug.


Other drugs used to treat sarcoidosis

Other drugs are sometimes used to treat sarcoidosis. A doctor may prescribe one of them if:

Most of these other drugs are immune system suppressants. This means that they prevent the immune system from fighting things like bacteria and viruses. As a result, a person may have a greater chance of getting infections.

Most of these drugs also can cause serious side effects. Some also could increase the chances of getting cancer, especially if they are taken at high doses.

A person and his or her doctor must weigh living with the symptoms of sarcoidosis against the side effects of the drugs.

Some drugs work better than others for different people.

A person may be given more than one drug.

Some drugs used to treat sarcoidosis are taken by mouth. Others are applied locally to an affected area.

Local therapy is the safest way to treat sarcoidosis. The drug is applied directly to the affected area. As a result, only small amounts of the drug reach other parts of the body.

Drugs used for local therapy include:

Drugs can be used locally only if the affected area is easily reached. For instance, inhaled steroids can ease coughing and wheezing in the upper airways, but they don't seem to relieve these symptoms when the affected lung tissue is deep within the chest.

A person should talk with their doctor about these treatments and the side effects that may occur.

The other drugs used to treat sarcoidosis include:

Nausea
Reduced white blood cell levels, which increases a person's chances of getting an infection. This drug has caused cancer in some people, especially when they have taken it at high doses. It should not be taken by patients who are pregnant.


Treatments for specific types of sarcoidosis

Lupus pernio is often treated by dermatologists, doctors who specialize in skin diseases, working with a sarcoidosis specialist. Because sarcoidosis varies so much among different people, a doctor may find it hard to tell whether the treatment is helping.


Other drugs being studied for use in treating sarcoidosis

Scientists also are studying drugs that are used for other conditions to see if they can help people who have sarcoidosis. These drugs include:

Scientists worldwide are trying to learn more about sarcoidosis and how to improve its diagnosis and treatment. Some recent studies have led to possible new treatments, which, in turn, are being studied. Current research includes studies of:

A person should take steps to stay healthy. This includes:

Joining a patient support group may help adjust to living with sarcoidosis. Talking to others who have the same symptoms can help a person see how they have coped with them.

A patient's regular doctor may be able to diagnose and treat the sarcoidosis, but diagnosis and treatment by a doctor who specializes in sarcoidosis is recommended. If a person prefers to use their regular doctor, they should see a doctor who specializes in the organs that are affected by their sarcoidosis at least once. For example, an ophthalmologist should be seen if the eyes are affected or a pulmonologist if the sarcoidosis is in the lungs. These specialists are often found at major medical centers. They will work with a person's regular doctor to help make a diagnosis, develop a treatment plan, and schedule periodic exams and lab tests.

Many women give birth to healthy babies while being treated for sarcoidosis. Pregnancy usually doesn't affect the course of sarcoidosis, and person can continue corticosteroid treatment through their pregnancy. None of the other drugs are recommended for use during pregnancy.

Sometimes sarcoidosis may get worse after the baby is delivered.

Women with severe sarcoidosis, especially if they are older, may have trouble becoming pregnant.

It's important for a person to discuss this issue with their doctor. A patient who becomes pregnant should be sure to get both good prenatal care and regular sarcoidosis checkups during and after pregnancy.

Regular follow-up care is important, even if a person isn't taking medication for their sarcoidosis. New symptoms can occur at any time, and the condition can get worse slowly, without the person noticing.

The frequency of examinations and tests depends on:

A person will probably need routine followup care for several years. Whether they see their regular doctor or a sarcoidosis specialist for this depends on the symptoms during the first year of follow-up.

Here are some examples of how follow-up care can be managed. They are based on either the person's condition at the time of diagnosis with sarcoidosis or the treatment used.


Follow-up based on the drug treatment

Depending on how serious the condition is and what organs are affected, certain tests may need to be done regularly.

Everyone who is diagnosed with sarcoidosis, even if they don't have eye symptoms, should see an ophthalmologist (eye doctor) for eye tests. This is important because there may be eye damage even if there are no symptoms.

These tests may include:

If eye symptoms develop, a doctor will have you repeat the tests.

A person should also have regular eye exams if they are being treated with:

These tests are used to check the course of sarcoidosis in the lungs. The results are compared over time.

A blood test for calcium should be done. If the calcium level is high, treatment is probably needed. A person also should not take vitamin and mineral supplements containing calcium or vitamin D, and should avoid too much exposure to the sun.

This test is needed to make sure that the heart is still not affected by sarcoidosis. The heart can be affected at any time if the sarcoidosis is active.